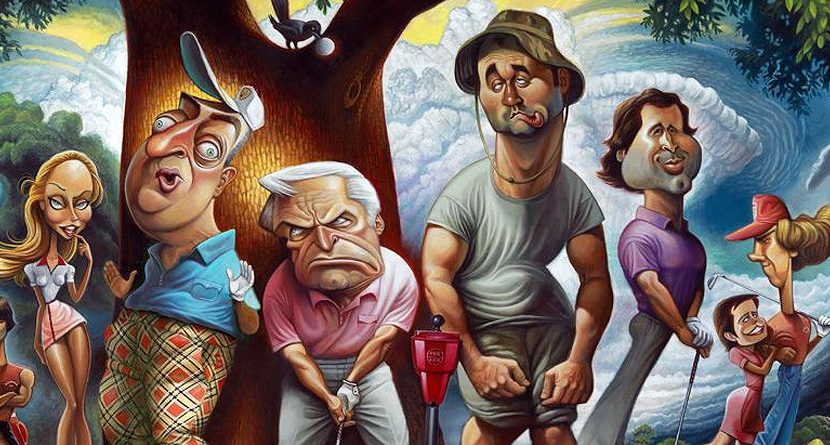 As the golf world celebrates Caddyshack’s 33rd anniversary this week, you’re probably wondering what Bushwood fanatics buy one another each year to spread the “holiday” cheer.

Wait, you’re not sure if you have a Caddyshack fanatic in your family? Trust me; you do. We may be a quiet bunch, but rest assured someone in your group chants “Nananananana” in their head while night putting. I promise you that.

Anyway, to assist in your gift buying expedition this week, here are nine of the best film-inspired gifts we found on the web. Enjoy! Nothing screams “I love this movie!” more than having your very own Bushwoods CC pin flag signed by the man himself, Danny Noonan. I would not only have this hanging above my mantel, but I may also baptize my first born in it. I wish I was kidding.

Every fan of the film or ex-caddy needs to have an orange Bushwoods CC hat in his or her collection. It is a status symbol in and of itself, reminding everyone that they shouldn’t mess with you or “Hey, they don’t getta no Coke”. OHMYGOD. This might be my favorite gift in the history of the universe. Judge Smails’ ridiculously horrendous fedora seen in the film makes the perfect gift basket, which comes equipped with Bushwood-logo golf balls and naked lady tees.

I may have spoken too soon, because this gift is outstanding. Rodney Dangerfield’s legendary portrayal of real estate tycoon Al Czervik in the movie provided fans pages of memorable quotes. What better way to remember the late actor’s finest role than to own this golf bag?

One of the more memorable quotes in the film is Judge Smails’ declaration to his nephew at the halfway house when their group makes the turn. Now you can have it monogrammed on your coffee mug! Cindy Morgan’s portrayal of Judge Smails’ niece, Lacy, was not only incredibly funny but she single-handedly injected sexuality into the game of golf… and we are all so happy she did. This autographed photo would look nice on your nightstand. Originally a commissioned piece, this amazing painting of the movie’s cast by David O’Keefe brings the “big four” of Chevy Chase, Bill Murray, Rodney Dangerfield and Ted Knight front and center, where they deserve to be.  You have all kinds of sizes and options to choose from including framing and the type of print.  Any golf fan would be proud to have this hanging in their office, equipment shack or yacht club.

Last but certainly not least, you can purchase a dancing robotic version of the movie’s true star: the Gopher. There might not be another movie mascot as recognizable as this little guy, so be sure to pick one of these up today.