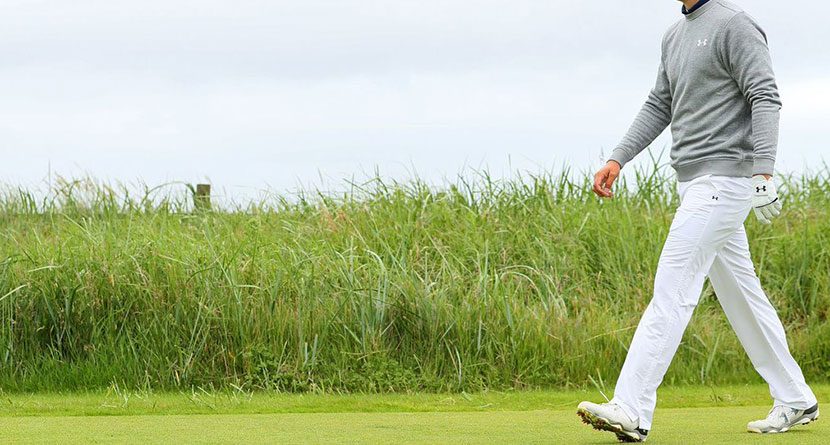 The modern golfer has become a finely tuned athlete. Their work on the practice range is now matched by their dedication to their bodies in the gym and in the kitchen. Under Armour has embraced this new-age golfer and put their best foot forward, literally, when it comes to No. 3-ranked golfer Jordan Spieth. Previously to track Jordan’s nutritional DNA while he’s competing on the course, Under Armour designed and debuted a smart shoe that would allow Spieth and his team to keep track of how he’s feeling, how much he’s moving and how he’s reacting to the situations he’s in while competing at the highest level.

Breaking down every facet of the golf game — in addition to workout and eating habits — allows golfers to pinpoint specific areas that could be affecting performance. While the technology is a great tool off the course and during practice rounds, it does have some limitations — most notably that the devices can’t be worn on the course during competition.

That meant Jordan Spieth, who has been using Under Armour’s connected fitness platform, UA Record, to track his sleep, fitness, daily activity and nutrition as he trains wouldn’t be able to keep tabs on his numbers during the course of play at The Open Championship.

Or so he thought. To give Spieth an idea of what his performance metrics looked like during a tournament round, Under Armour created its first-ever custom, smart golf shot for the two-time major winner.

Built on the same foundation as the UA Drive One shoe Spieth’s been wearing since the Masters, the custom model houses an embedded motion sensor within the shoe’s midsole — the sensor is identical to the one in UA’s Speedform Gemini 2 Record Equipped, the brand’s first smart shoe —that automatically tracks metrics such as distance and steps. During the final round at The Open Championship, Spieth logged a total of 13,541 steps.

Spieth received the shoes more than two months ago and wore them for approximately five weeks before using them for tournament play. At the moment, Under Armour said it has no plans to release Spieth’s custom shoes to the public.

Here is a screenshot of Spieth’s UA Record Dashboard, courtesy of Under Armour.