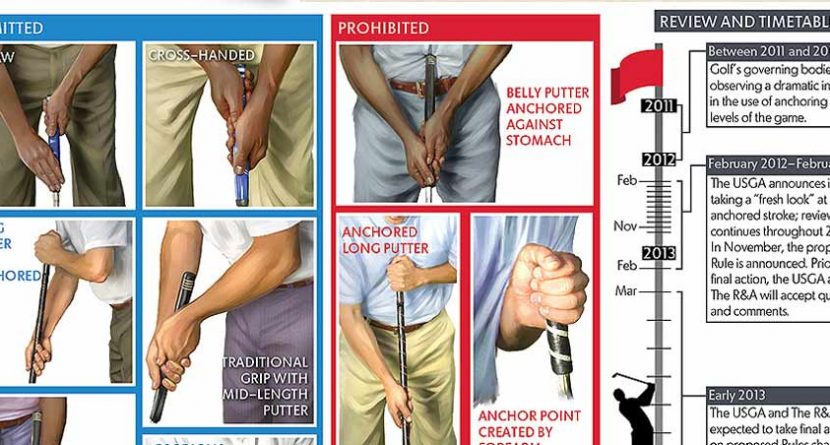 With the conclusion of a 90-day comment period on Thursday, the U.S. Golf Association and R&A both responded Friday to the litany of feedback — some very public, most private — to their proposed ban of the anchored stroke.

The R&A went first, offering cover to the USGA, which has been on the receiving end of stern criticism from the likes of TaylorMade-adidas CEO Mark King, PGA Tour commissioner Tim Finchem and PGA of America president Ted Bishop.

“Anchoring has been a polarising issue in our sport and despite having weighed the matter thoroughly before making the proposal, we believed it was important to give stakeholders in the game the opportunity to air their views,” the R&A said in a statement. “Our consultation period has generated a number of considered responses which have continued to arrive right up to the deadline. We appreciate those responses and will take time to review and evaluate them.”

The second paragraph attempted to provide a more global view of reaction to the proposed rule as the American response has overshadowed support for the rule from the European Tour, European PGAs and Sunshine Tour in South Africa.

“We note that this matter has proved particularly sensitive in the United States, while the proposed Rule change has been received more favourably across the international golfing community. As we have throughout this process, we will work closely with the USGA in moving towards a final resolution.”

A little over 90 minutes later, the USGA added their two cents.

“The 90-day comment period on proposed Rule 14-1b has been very constructive and we appreciate the thoughtfulness of everyone who offered feedback,” said the USGA in a statement. “We received comments, questions and suggestions from recreational golfers, golf professionals and organizations representing many segments of the golf community. The discussion has been informative and serves as a strong reminder of just how passionate golfers are about the game – no matter their position on this specific issue.

“For well over a year, the golf community has engaged in a healthy and spirited discussion about anchoring, as well as other important issues confronting the game. Throughout this period, we have worked to explain the intent of Rule 14-1b, which aims to clarify and preserve the traditional and essential nature of the golf stroke that has helped to make golf a unique and enjoyable game of skill and challenge for centuries.”

The governing bodies said last November they anticipated a final ruling in Spring 2013. With the influx of opposition, however, that original target now seems unlikely.