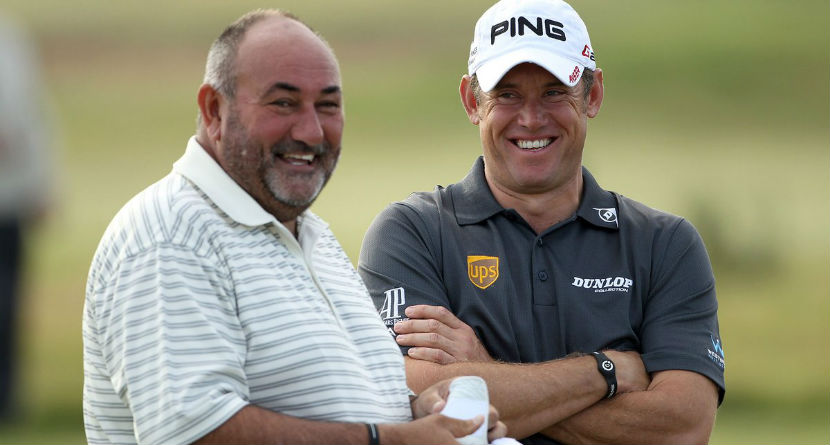 First, it was Phil and Bones splitting up. Now, another longtime golf power couple is going their separate ways. On Tuesday, it was reported that Lee Westwood is leaving Chubby Chandler and ISM after 24 years and will be joining IMG.

The Telegraph’s James Corrigan has the details:

After 24 years, Lee Westwood has left International Sports Management and split with his manager Chubby Chandler. The former world No 1 is joining IMG.

ISM confirmed the move but declined to comment further. The reasons remain unclear, although it is understood that there is a legal dispute between the golfer and the agency.

The news will cause shockwaves on the range. Along with Darren Clarke, Westwood was one of Chandler’s first signings after he founded the agency in 1991. As Clarke and Westwood rose through the ranks, the duo were often seen with Chandler, who became as much a friend and a confidante as a manager. Clarke remains with ISM.

The closeness between Westwood and Chandler was not just witnessed in golf circles but on racetracks, too. They have owned many horses together, including Hoof It, which won Handicapper of the Year in 2011 following its win in the Stewards’ Cup.

The last few years have witnessed huge change for the 44-year-old. Two years ago, he left his wife, Laurae, the mother to their children, and moved from the family home in Florida. He has a new partner in Helen Storey, a fitness consultant.

Westwood’s departure is just one of a few who left ISM in recent years including Rory McIlroy and Charl Schwartzel and Matt Fitzpatrick.

Westy finished runner-up at the 2016 Masters. So far in 2017, he has four top-15 finishes in 11 European Tour starts and is currently ranked 57th in the world.