Rules Quiz: When Do You Get Relief? – Answers 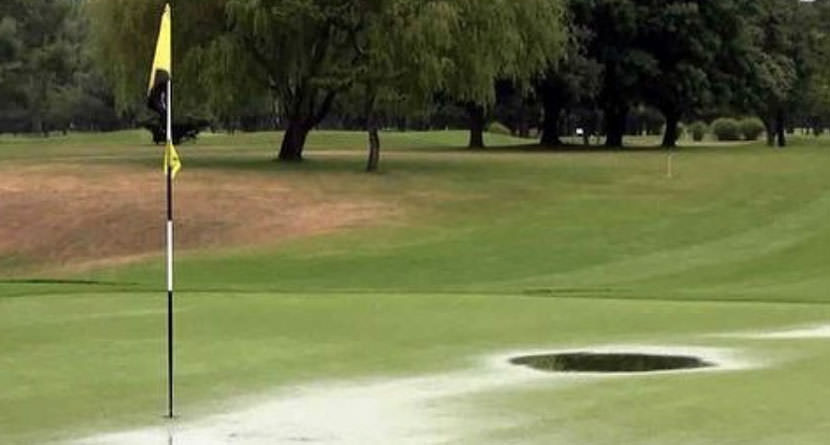 1. You may take relief without penalty if there is interference to the lie of your ball, your stance, or the area of your intended swing by a puddle of water within a water hazard.

False. The Definition of “Casual Water” states, in part, “”Casual water” is any temporary accumulation of water on the course that is not in a water hazard…” [Emphasis added]. Thus, any water within the margin of a water hazard is part of the water hazard, relief for which is available only by incurring a one-stroke penalty pursuant to Rule 26 [Water Hazards].

2. Water that overflows and extends beyond the margin of a water hazard is considered to be casual water.

True. See the Definition of “Casual Water” and Decision 25/2 [Overflow from Water Hazard].

3. With your ball situated just in bounds, you may take relief without penalty from a puddle of water that is out of bounds if the puddle interferes with your stance.

False. The Definition of “Casual Water” states, in part, “”Casual water” is any temporary accumulation of water on the course….” [Emphasis added]. As the puddle of water is out of bounds, it is not casual water. Therefore, you must either play the ball with your stance in the water, or deem your ball unplayable and incur a one-stroke penalty under Rule 28 [Ball Unplayable].

4. If you are unable to find your ball that you know came to rest in a large pool of casual water in the fairway, you must proceed under penalty of stroke and distance.

5. With your ball just off the green, you are entitled to relief from a puddle of casual water on the putting green that intervenes on your line of play.

6. There is no penalty if your club touches a puddle of water in a bunker so long as you do not ground your club prior to making your stroke.

True. See Decision 13-4/7 [Touching Casual Water in Bunker with Club] which states, “The player incurs no penalty as he did not touch the ground in the bunker with his club prior to making his stroke ….” See also Rule 13-4 [Ball in Hazard; Prohibited Actions].

7. If there happens to be some unmelted snow on your line of putt, you may take relief for casual water.

True. According to the Definition of “Casual Water,” snow is either casual water or loose impediments at the option of the player.

8. Soft or mushy earth is considered to be casual water only if water is visible on the surface before or after you take your stance.

True. The Definition of “Casual Water” states, in part, “”Casual water” is any temporary accumulation of water on the course that is not in a water hazard and is visible before or after the player takes his stance.” [Emphasis added]. See also Decision 25-1 [Soft, Mushy Earth].