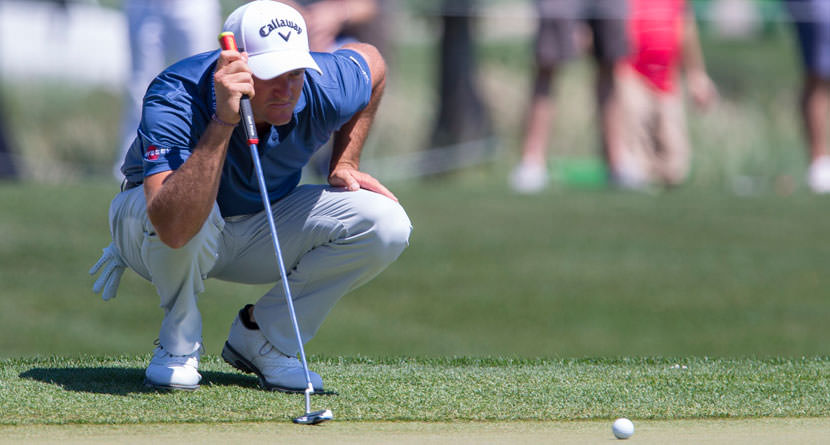 Sam Saunders may never fully emerge from the enormous shadow cast by his late grandfather, Arnold Palmer, but that’s alright with him.

Perhaps not up to his grandfather’s enormous standard, Saunders has carved out a very nice living for himself having made over $3.5 million on the golf course, and as he enters his 30s, the Orlando native has found some comfort in his own skin after graduating to the PGA Tour full time in 2018 after bouncing back and forth between the Web.com Tour.

With the next chapter of his career underway, Saunders has finished inside the top-10 three times this season, including his best finish of the year coming at A Military Tribute at The Greenbrier on Sunday.

So what has fueled Saunders’ good play of late? Naturally, it was something of his grandfather’s: an Odyssey 2-Ball putter that he put into play this week.

Sam Saunders is using one of his grandfather’s putters this week.

“He did tell me that it was one that he wanted me to use. Hopefully it’s got some good luck in it … He loved that two-ball putter.”#ArniesArmy pic.twitter.com/vFsKbtRpO1

The club is nothing new to Saunders who had used it previously in junior golf, college and his early professional years, but he brought it out of retirement this week at the Old White TPC to make a run at his first professional victory.

“When I first turned pro and got my first few starts on the PGA Tour in 2010, I used that putter and putted really well with it that year, actually,” he told PGATour.com. “As every young guy out here does, you see all these beautiful putters out here on the green and you have one bad week and you start trying everything else. I’m sure I’ll change again.

“But it’s a great putter and he did tell me it’s one he wanted me to use so hopefully it’s got some good luck in it.”

Saunders could only muster an even-par 70 on Sunday at the Greenbrier, leaving him seven shots shy of eventual champion Kevin Na. Even still, the putter has rejuvenated Saunders’ putting game as he picked up more than three strokes on the field on the greens.

“I’m pretty sure that was the one that (Palmer) was using,” Saunders said. “He loved that 2-Ball putter, and I think this was the one he used in the latter part of his career.”

Saunders ultimately finished a shot shy of qualifying for next week’s Open Championship, but with his grandfather’s 2-Ball in the bag at this week’s John Deere Classic, he’ll have one more opportunity to punch his ticket to Carnoustie.