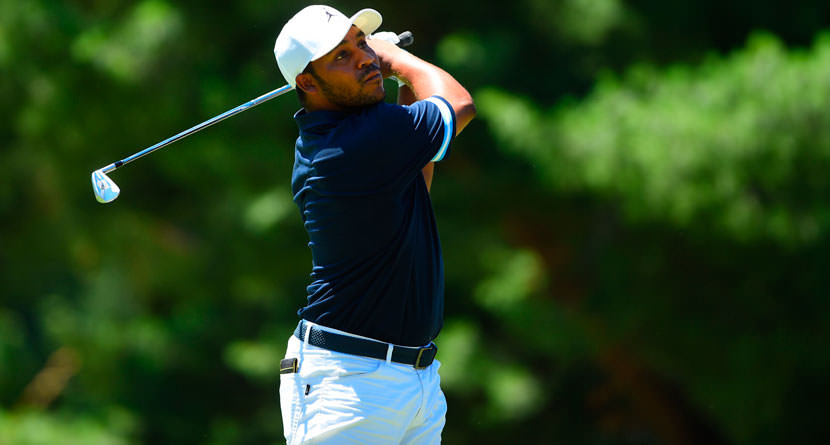 PGA Tour pros still have chores to do regardless of how much money they make on a given weekend.

Take Harold Varner III, for instance. The third-year PGA Tour player notched a T5 finish at this past week’s A Military Tribute at The Greenbrier, tying his best-ever finish on the PGA Tour (T5, 2016 OHL Classic at Mayakoba),

On Saturday evening, holding a share of the 54-hole lead, Varner spoke to the media about his perspective whether he would go on to win or shoot 90 on Sunday.

Come Monday morning, despite collecting a check worth nearly a quarter of a million dollars for tying for fifth place, Varner found himself at his parents’ house in North Carolina with grass to cut.

5th place in yesterday’s PGA Tour event. Cutting the rents yard at 7 am this morning. #Persepctive #WeHere @JohnDeere I might look better in some green ??‍♂️. https://t.co/dYCuWGliXN pic.twitter.com/IVGRqwFJ64

A man of his word, barely over 12 hours removed from finishing his final-round 2-over par 72 and earning the best finish of his career, there was Varner on a lawn mower at 7 a.m. preparing to cut his parents’ grass.

He also took the opportunity to shout out the presenting sponsor of this week’s John Deere Classic, so maybe the next time he’s back in Gastonia, North Carolina after a solid tournament result, he’ll have a new set of wheels to get around his parents’ lawn.