Best of Tiger-Rory-Ahmad Banter from Match at Mission Hills: Part 2 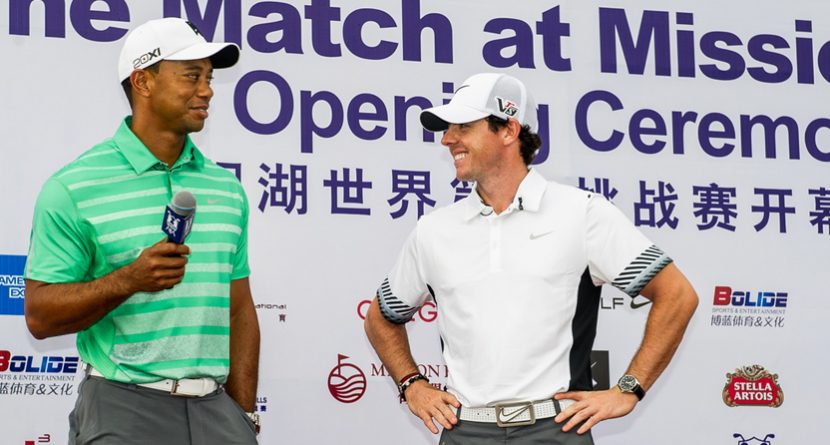 Aside from the great golf, the highlight of Tiger Woods’ and Rory McIlroy’s one-on-one duel Monday in The Match at Mission Hills was simply the chatter between the two golfers. The discussion covered obvious golf topics like equipment and travel, but also included friendly banter with Ahmad Rashad, Back9Network’s correspondent who walked the Blackstone Course with the superstars.

After catching up on some sleep after the all-nighter we endured covering the match, we sifted through the transcript of what the mic’ed-up athletes – Ahmad included – chatted about on the course. Below are the highlights, with a little editing involved, as Ahmad sometimes revisited topics Woods and McIlroy discussed on their own – or it just took him a little time to catch up to the youngsters.

The state of Rory’s game

Ahmad: How’s your game these days?

Rory: I’m feeling good about it. I’m feeling probably the best I’ve felt all year. It’s obviously a little bit of a struggle; I’ve done some good work on my swing, saw some really good things in the past couple weeks. It’s just one of those things where I need to sharpen everything up and take more of the birdie chances. I’m hitting well and hitting a lot of greens, I just need to get the putter rolling better.

Ahmad: I think a lot of people don’t realize it’s a process.

(Later in the round)
Rory: (to Ahmad) Yeah, I love this driver I put in play a couple of weeks ago. It’s Nike’s new one for next year – the Covert 2.0. It’s a great addition. It’s more forgiving, a little bit of a bigger head. I was just saying to Tiger, if I hit it a little off the heel or toe, the shot dispersion isn’t nearly as much as it was before. So even the mishits are even going a lot straighter.

(Later in the round)
Ahmad: Before we were talking about fitness and how important it is to stay fit. I know you have a gym regiment and obviously people don’t understand, you gotta walk a golf course. I’d imagine that confidence comes with being in shape and never being tired.

Rory: Oh for sure. It’s not just walking the course; it’s everything. It’s the stress that the golf swing puts on the body as well. We do a lot for injury prevention, and you look at Tiger, he’s the one that really revolutionized golf fitness. Look at the shape he’s in; I mean he’s in great shape and he’s strong in the right areas. Your legs and your core are very important for the golf swing. The state of Tiger’s game

Ahmad: So what kind of strategy do you have when you try to play this thing?

Tiger: Try and listen to (Rory, who’s played the course before).

Ahmad: Really? Scrappin it around?

Ahmad: Rory said that he’s been playing pretty well and you just came off of two weeks of doing nothing. It would look pretty bad if you played better than he did.

Tiger: I’m just scrappin’ it around.

Ahmad: When you have eagles that’s not called scrapping it around.

Tiger: Nah my feel is off. I just haven’t played, so I’m relying on kind of shaping shots both ways big time. My feels aren’t quite right, but there’s plenty of room on this golf course, which is good.

Ahmad: So would you boys say that as competitive as you are that competition is heating up a little bit?

Ahmad: Well, that was a little bit but now it’s starting to be real.

Tiger: Well, we were talking then. We were definitely woofing then. You start woofing a lot then and you get less and less as the day goes on.

Ahmad: It’s my job to keep the conversation going even when you don’t want to talk towards the end.

(Later in the round)
Ahmad: Are you feeling better two holes after you told me you were just slopping it around?

Tiger: I’m just happy to be in your presence.

Rory: Next year I’m done with hopping around the world.

Rory: I want to feel like I have a home somewhere, you know? I actually want to go home.

Tiger: I did that early in my career too – traveled too much. Ahmad wants in on the action when they get back to Jupiter, Fla.

Ahmad: Did I tell you? I just want you and Rory to know that I have winner.

Ahmad: No, golf. When we get home I have winner.

(Later in the round)
Ahmad: I told Tiger that one thing that you both have to realize is that I have winner when we get home.

Rory: OK, I’m sure I can find a good partner. Tiger: (While the ball is in the air) Ahmad, talk to me… (ball lands) Hell of a caddie! Joey, you’re done! Ahmad: A wonderful exhibition of golf between the two of you. You guys were doing the match play and it was very competitive.

Tiger: We had a great time today. I think that everyone out here enjoyed it. We didn’t really play probably our best on the front nine, but on the back 9 we got it going and shooting – what? – 5- and 6-under par, respectively. We got it going.

Rory: Yeah, I think that’s what all these people are out here for – to see some good golf. As Tiger said, on the back 9 we really did that. We made a lot of birdies and both eagled the 12th hole, which was probably the highlight of the day.

Ahmad: I would think that you won two times in a row, you’re getting close to domination?

Rory: I don’t know about that. I beat (Tiger) by one shot twice. It’s always fun to play with Tiger in events like this and we have a lot of fun. It’s great that we can bring these sort of matches to places like China and across the world, and hopefully we can do that in the future as well.

Ahmad: A wonderful exhibition by two great golfers and two gentlemen. Thank you very much!