Best of Tiger-Rory-Ahmad Banter from Match at Mission Hills: Part 1 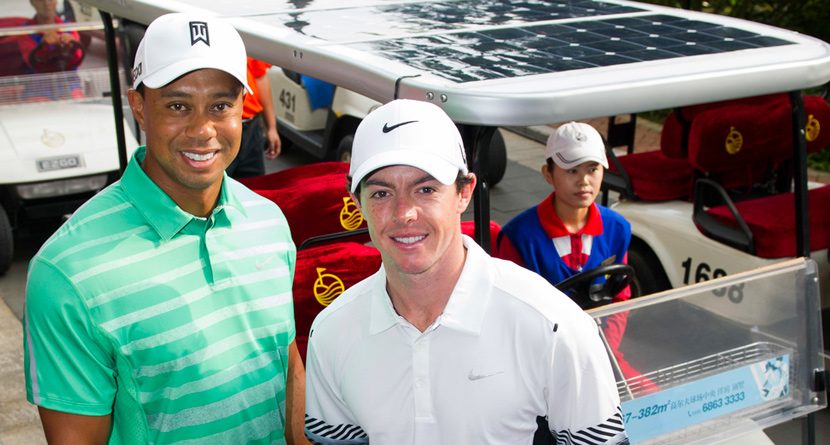 Aside from the great golf, the highlight of Tiger Woods’ and Rory McIlroy’s one-on-one duel Monday in The Match at Mission Hills was simply the chatter between the two golfers. The discussion covered obvious golf topics like equipment and travel, but also included friendly banter with Ahmad Rashad, Back9Network’s correspondent who walked the Blackstone Course with the superstars.

After catching up on some sleep after the all-nighter we endured covering the match, we sifted through the transcript of what the mic’ed-up athletes – Ahmad included – chatted about on the course. Below are the highlights, with a little editing involved, as Ahmad sometimes revisited topics Woods and McIlroy discussed on their own – or it just took him a little time to catch up to the youngsters.

Rory: After Presidents Cup did you just take a couple of weeks off?

Tiger: I haven’t touched a club until today.

Rory: So how long’s that been?

Tiger: I had to do that Nike shoot so I touched a club then.

Tiger: Just north of my house. Taking time off from golf

Rory: It’s funny – if I take a couple weeks off, my first couple of days back I actually feel like I hit it really well, then it progressively gets worse that week. Then you sort of have to build it up again.

Tiger: My first day back is always my best day. Then I lose it from there.

(Later in the round)
Ahmad: Rory, I heard you saying that when you take a few weeks and you come back, you feel like you can really strike them. Then you gradually get worse.

Rory: It gradually just disappears. I feel like you take two weeks off and it takes two weeks to get it back because that first week, it starts well, then it sort of declines. You gotta build yourself up that second week. That’s probably what he’s going to be doing.

Ahmad: So people say that this is just an exhibition, but you know as well as I do that it really matters who wins.

Rory: It does, yeah. I mean we both want to win obviously. I’ve played the last couple of weeks, so I’m sharper than he is but that doesn’t look good for me if he comes off two weeks of not hitting the ball then beats me today. So I gotta play well.

Ahmad: OK, I will be instigating as we go along! Tiger, you’ve taken a lot of time off. Feeling a little rusty?

Tiger: Oh yeah, big time. I don’t really have a very good feel for what’s going on right now. So this should be interesting. Rory: We did a little bit of analysis – you probably don’t want to hear this now – but you could have not played BMW (the third event of the FedExCup playoffs) and no matter what happened, still be No. 1 going into the Tour Championship.

Tiger: Yeah… The amazing thing was the wear and tear on the guys on the Tour Championship. Everybody played like s***. That golf course was set up so easy. Nobody shot a low score.

Ahmad: First of all, you guys walk too fast. You can slow this thing down a little bit, just a tad so I can keep up.

Rory: We play with you back in Florida in carts all the time. We do that just because we know you’re a little old.

Ahmad: That’s a shot! I like riding in cart… I feel like I’m running a quarter mile and I’ve let them get a little ahead of me, and I’m trying to…

(Later in the round)
Ahmad: You know what we should do next time? Let’s time how much it takes from tee shot to ball ’cause we gotta be near world-record pace, as fast as you guys are walking.

Tiger: This is how we always walk.

Ahmad: Maybe you should stroll more, that might help. It would help me if you did that more today.

(Near the end of the round)
Ahmad: As we wind this thing down, I think the only surprise is that I made it walking 18 holes. Of course, I haven’t really made it yet. It’s been a fine afternoon, a great afternoon. A lot of fine golf by both players.

Tiger: Why are you breathing so hard?

Ahmad: I’m not breathing hard. Of course, before you came to me I jogged a little hard. But you guys have had a good day.

Rory: Yeah, great day! I think on the back 9 the standard of golf’s been a little bit better.

Ahmad: Is that a plug? Tiger how was your back 9.

Ahmad: In golf and in life, the back 9 is most important, right? Tiger: Is that a flat brim, man?

Tiger: You rockin’ a flat brim? Got the hologram too. Wow.

Tiger: A 90-year old man rockin’ a flat brim with a hologram.

Ahmad: Rockin’ it good, too!