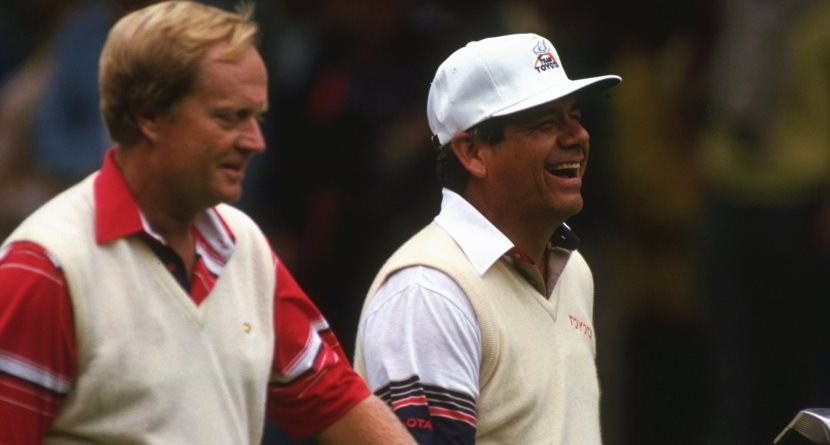 As if the first 72 holes of a major golf tournament weren’t intense enough, playoff golf increases the tension. And when events use the 18-hole playoff format – as opposed to a one-hole-at-a-time sudden-death setup, which immediately follows the final round – players have an entire night to let the nerves sink in.

The ever-affable Lee Trevino decided to cleverly break that tension before his 18-hole playoff with Jack Nicklaus at the 1971 U.S. Open at Merion Golf Club, site of this year’s tournament.

With Nicklaus sitting under a tree, looking a bit tense as he awaited the start of the round, Trevino pulled a rubber snake from his golf bag. He tossed it right next to the bench on which Nicklaus sat. The crowd roared with laughter, and the Golden Bear himself couldn’t help but chuckle.

“I need all the help I can get,” joked Lee, who hailed Nicklaus as “the greatest golfer who ever held a club.”

Initially, it looked as if the prank backfired, as Nicklaus went one up on Trevino after the first hole. But that bogey would be Trevino’s only one of the afternoon, as Nicklaus went on to bogey and double-bogey the next two holes and never regain the lead. Trevino won his second U.S. Open by three shots.

That victory propelled the Mexican-born Trevino, who grew up picking cotton, to become the PGA Player of the Year in 1971. He won the British Open a few weeks after the U.S. Open, captured the British Open again in ’72, and the PGA Championship in ’74. His final major title also came at the PGA, in 1984.

Trevino might have played in the same era as the greatest golfer ever, but he won a total of six majors in his career. Four of those were head-to-head take-downs of Nicklaus.