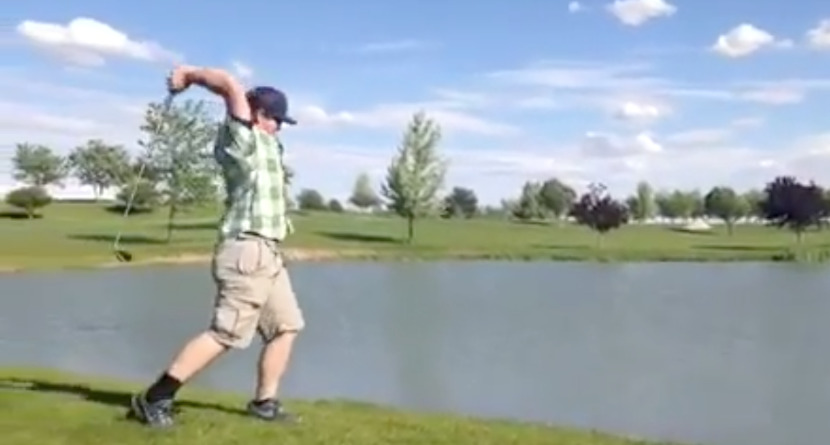 Club throws have been a part of the game ever since it was invented. There’s nothing quite like taking all of your frustration out on the very club that failed you by launching it into the air with no regard for where it lands.

Fortunately, the internet and smartphones have made capturing these moments infinitely easier. Here are 10 of the best amateur club throws we’ve seen.

The feeling of flailing at a ball only to catch the top half of it is one many golfers can relate to. Similarly, the instinctual reload and letting the club fly after the ball is the perfect stress relief one needs following the cold top.

While the man in the foreground is filming his swing, and doing a fine job at that, the gentleman in the red sweater behind him is having what must be the worst range session of his life. He goes through shot after shot and you can see his indignation grow as the ball clearly isn’t going where he wants it so he decides to take out his frustration on his clubs. He flings, tosses, throws and wildly swings his club around after each shot in a desperate cry for help that hopefully results in him getting some lessons.

This swing should never be filmed in slow motion, but thankfully it was for our sake. After catching the big ball before the little ball, this gentleman with the bionic golf glove on his right hand lets the club go in utter disgust sending it tumbling down the fairway almost further than the ball itself. You know it’s good when you can see the flex in the club each time it bounces off the ground.

Another classic amateur one-two combo as we mentioned earlier. Yes, this tomahawk club throw is hilarious, but it’s even funnier considering this guy knew he had no chance to get it over the water with that awful attempt at a golf swing. Although, you have to respect his showmanship when he tossed his hat as he walked by the camera.

With success stories like Tiger Woods, who started playing golf at a young age, parents everywhere who enjoy golf hope their kid can pick up the sport early and never look back.

This kid probably won’t be the next Tiger after play like this. His frustration and club toss have all the makings of a future hacker, and not that of a calm and collected Pro. At least he knows to go pick up after himself and goes to get his club, which is more than you can say for some others.

Not all club throws have to be made in frustration. This bro pulled off this ridiculous trick shot on a beach in which he hits two balls with two different ball flights at once. Why not celebrate this amazing accomplishment by hurling your favorite driver into the ocean!

This guy barely saw the ball come off his club face before flicking his driver backward in disgust. Unfortunately, the mate filming it was right in the line of fire and we can only assume got drilled with the club as we hear a bad word and see it drop to the ground.

Have to love the disgusted club drop after thinking you just fatted one. It’s one thing to finish your swing, it’s another to want no part of what you just did, even if it ends up six feet from the hole. Respect!

This golfer had his mind made up before he even hit the bad shot. It would be too kind to call it instinctive; this one was premeditated. He might want to talk to someone about his anger issues.

Flick of the Wrist

This drama filled sequence between the duffed tee shot and the flick of the wrist club throw looks like it should be nominated for an Academy Award for outstanding cinematography. The slo-mo effect and the wide-panning shot of the club ending up on a different green is some of the best footage we’ve ever seen.