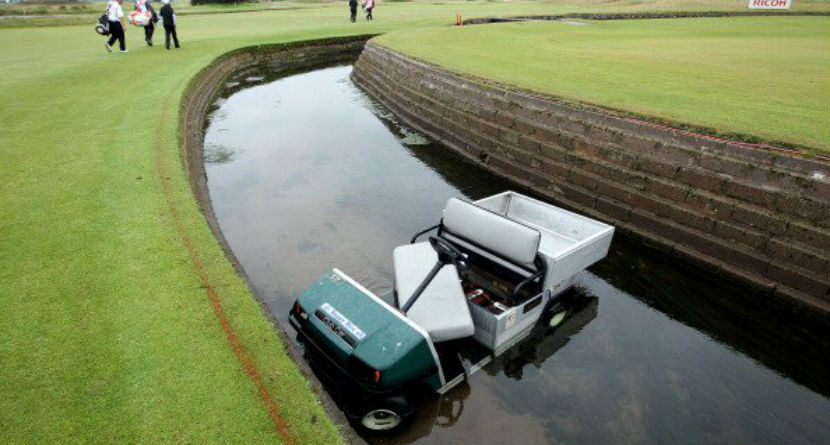 The introduction of the golf cart changed the game. People now have a chance to get to their ball quickly and speed up play. If golf wasn’t a leisure sport already, it is now.

It also allows folks to drive who shouldn’t necessarily be behind the wheel. So see if you recognize any of the boneheads in this roundup of 10 ridiculous golf cart fails.

This video starts off innocent enough, but takes a wild turn, and fast. While the player is taking a drop from the cart and path, the driver peels out unexpectedly and nails a tree head-on. Thankfully he was alright.

This golfer went full send launching himself off up and over a flower bed at an apparent outing, judging by the signs stuck in the ground that he narrowly avoided. Upon landing he went full yard sale!

Right from the get-go, you know this isn’t going to end well. This person thought it would be wise to ignore common sense and book it down a steep hill, in a golf cart, without any semblance of safety precaution. Sure enough, he hits a bump and it sends him flying. There goes the security deposit!

Golf cart races are as inevitable as bogeys and beers when buddies get on the golf course. However, moving the race from a winding cart path to a more open area without embankments may be worth the effort to avoid anyone else having their lower body run over by the cart.

In another battle for survival, this guy tries to escape from a sinking golf cart. Instead of his friends helping, they decided to film and laugh. How he got himself into that mess we haven’t got a clue.

GoPros are all the rage nowadays and videos in first person give a great angle and can make you feel like you are a part of the action. Which is why it is so much harder to watch these two go down the cart path at top speed before pulling a 180 and slam into a tree. The tree won this round as it takes off the top and whole back part of the cart.

If this was a driving test, this girl would’ve failed. Things escalated quickly after her golf cart gets rolling. You can hear the person filming yelling “brake, brake, brake” to no avail. She ejects while the cart and the passenger roll into the woods.

What on earth is this guy doing? After taking his cart for a swim, he clearly looks like he immediately regretted it as he hangs on for dear life.

When you finish double double. @foreplaypod

Whether this guy thought he was going to catch some big air or not, he didn’t. Instead of getting any elevation, his golf cart nose dived right into the ground.

Here we find a range picker engulfed in flames. We know it’s been hot around most of the United States lately, but we haven’t seen anything burst into flames like this until now.