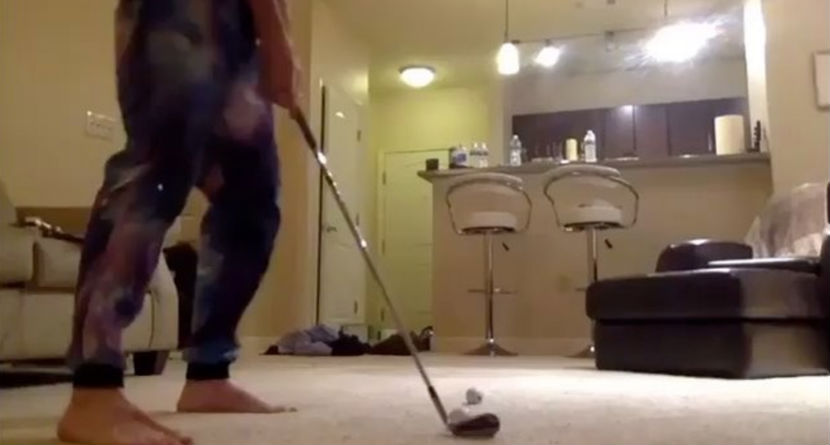 Most of us aren’t pros, but on average, most amateurs can make it through a round or two without completely embarrassing themselves.

That is not the case for everybody though, and maybe you have one or two knuckleheads in your playing group that have pulled off some of these 10 hilariously embarrassing amateur golf bloopers.

Down for the count

This is definitely what happens when you drink and play ?? tag a mate who can’t hit ! #golf #bestshot #youcandoit #drunk #golffail #fail

We get this amateur fail list started with a clip that is so terrible you almost feel bad for the guy. Who are we kidding? No, you don’t. This dude deserves to be laughed at for this pathetic display of a swing. The takeaway surprisingly is not that bad, but once the left foot gets off the ground during the backswing, things go downhill quickly. As soon as he transitions to the downswing, his right foot seems to slip (we’ll give him the benefit of the doubt) and his arms speed up throwing him completely off balance causing him to miss the ball completely. In the end, he takes a tumble which his friends let him have it. Whether or not he was drinking or not per what the caption reads remains to be seen.

Here we have a guy who obviously isn’t very good at golf, but hey, you have to respect the fact he’s out there. Although, the group behind him probably disagrees. The “Golf is fun” caption in the clip is the definition of irony.

If you are going attempt this iPhone trick shot, you may want to keep a backup phone handy just in case. This “pro” was leading a clinic when he used his phone as a tee in a lesson trying to demonstrate how to keep the club shallow through impact. We don’t think that’s covered under warranty.

It doesn’t get much better than firing up the protracer app on your phone and having your buddy absolutely hosel one out of the frame leaving behind an almost perpendicular trail to the intended target. Have to love the fact it registered as a one-yard drive. That might even be generous.

That’s One Way To Do It

This guy may have had a long afternoon if this is how he chose to avoid hazards the whole round. While the ball didnt go into the water, it also didn’t leave the dock, so you have to take the good with the bad I guess?

This brilliant golfer thought it would be a good idea to toss his clubs over a creek instead of carrying them around it. On second thought, maybe it wasn’t such a good idea.

Ever wonder what it’s like to fall off a multi-level driving range? This idiot could probably tell you. At least he saved the driver!

Everybody likes to see what they can do when swinging like Happy Gilmore. This guy will have 6-8 months to think about what went wrong while he recovers from reconstructive knee surgery.

For some people, the struggle getting off the tee with driver is real. Take this guy for example. He lost yardage when he cold-topped his ball into the turf. To be honest, we are more impressed than anything. That is tough to accomplish.

While you can argue this guy got what he deserved when he decided to hit real golf balls indoors, you have to admit it was a pretty good shot. That light is not a large target. Although the reaction of standing there in total shock is priceless.