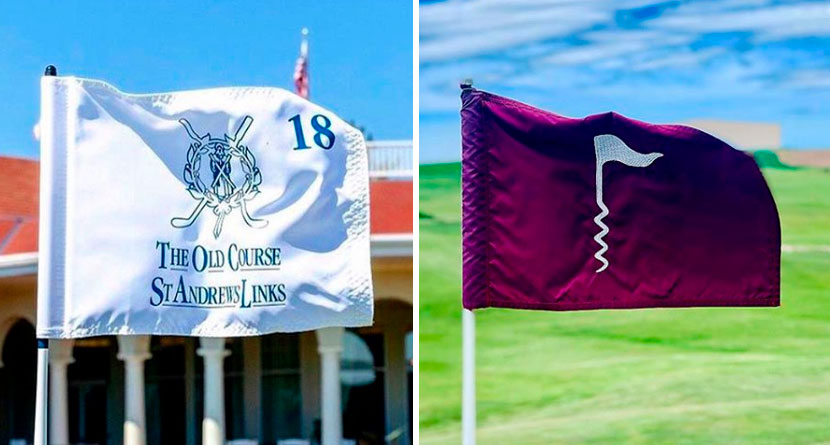 Flags are used around the world to signify many things, and when it comes to the golf course they are a symbol of that area off in the distance where you are supposed to hit your ball in as few strokes as possible. The flagstick on a golf course can be adorned with all manner of things, but a standard flag is the traditional topper that can be emblazoned with the course logo, a sponsor, the hole number or even just a plain color. The pin flag is also one of the only flags you never want to see waving in the wind, as chances are that won’t be good for your upcoming swing.

So in honor of Flag Day in the United States, here are 10 golf flags worth aiming for.

Considered by many to be the birthplace of golf, St. Andrews is a worthy destination for all fans of the game. The hole flag for this course is one of tradition and encompasses everything that you can usually find atop the flagstick, The course name, logo, and hole number.

This flag has also been included in some recent wagering, as The Old Course and Pinehurst have had a bet going in the last two Ryder Cups to fly the opposition’s signature flag on their 18th green depending on the outcome, which you can see in the above meant that Pinehurst had to put this up last year.

When Am I Ever Going To Need To Know Math

Would have a tough time playing the Scottish Open: Math-equation flags! pic.twitter.com/LRj1aLINnL

How many times did you say it growing up, “When am I ever going to need to know this” while learning something in school? Most golfers can get away with a lack of math skills as the game only requires you to count up one by one, and if you’re good you will never even need to count that high.

Yet what Dundonald Links did for the 2017 Scottish Open may have tested the knowledge of both golfers and fans as they replaced the traditional hole numbers with simple math equations that hopefully didn’t confuse too many people attending the event.

Sometimes a simple symbol is all you need to get your point across, and nothing is simpler than a single color number on a plain background. You don’t need to go all out when designing a flag for the course, as most of the time people aren’t even paying attention to it, and it’s routinely on the ground. All you need to do is make sure that people know what the hole is and the job is done.

Race For The Checkered

What better way to let you know that you have reached the finish line of a particular hole than the thing everybody already knows means the end? While the checkered flag is synonymous with racing, a checkered design is perfect for the golf course as well. Though your buddy who starts waving the flag around like they’re at the Indy 500 isn’t as clever or original as they think.

Placing the logo for your course on the flag is an obvious choice, and when your course logo is as clever as the one at Wine Valley Golf Club, it’s a no brainer. The real shame here is that while the corkscrew flag design is brilliant, unfortunately, their flagsticks are standard issue, and not a practical way to open bottles during the round.

What better way to celebrate Flag Day in the United States than by flying the stars and stripes in the cup. While not the traditional method of flag design for the pin, it makes perfect sense for days like today, just make sure you don’t let it touch the ground.

Once In A Lifetime

When golf made its return to the Olympics in 2016 it meant that for the first time in over 100 years there would be a pin-flag with the Olympic rings on it. This flag was also special for Justin Rose who hit the first ever Olympic hole in one on the first day of play. Traditionally a course will gift a flag to a player who hits an ace, so hopefully Rose has one of these hanging up in his trophy room somewhere.

A Flag Unlike Any Other

While there is nothing that is overly different about this flag it still stands out amongst them. While most flags with the course or event logo are created with a plain background color, there is something special about the bright yellow used for the Masters’ flags at Augusta. Like flags flown over countries or states, a flag represents so much more than just the place, it is a symbol of everything associated and you have to admit that the Masters is about much more than just the event or the place.

Flag For The Cure

Usually, for special events, a course will replace their normal flags with ones specifically designed for the tournament being held, these typically included sponsors and brands, or the logo of the organization putting it on. The pink ribbon is synonymous with the fight to end breast cancer so it was the perfect symbol for several Troon courses to place on flags during October’s Breast Cancer Awareness month last year.

Flags Are Autographed at Bushwood Sir

Pin-flags can also be collector’s items, be it ones you buy at the pro shop for a favorite course, ones you are gifted by hitting a hole in one, or ones that were used as props on a movie set. What golfer wouldn’t want to have this hanging in their office or man cave at home, especially if it was signed by Ty Webb himself, because even if you have a bad round or two it’s some cool movie memorabilia, so you’ve got that going for you, which is nice.