Looking good is half the battle when you are on the golf course. Unfortunately, there are a few players on tour that don’t necessarily agree when it comes to fashion. They would prefer to wear what they think looks good, as opposed to what actually looks good. From crazy pants to ugly shirts, to even the occasional hilarious hat, in honor of National Argyle Day here are 10 golfers who should have gone for traditional look.

John Daly is the king of flashy pants. Sponsored by Loudmouth, the patterns he has on his bottom treads are generally some of the wildest and craziest the fashion world has ever seen. While you can make an argument that his pants are a direct correlation to his bold play, you can also assume he may just be insane. From pictures of people or comics, or landscapes to random designs of bright colors, to even the occasional artwork, Daly has solidified his place amongst the fashion gods. Grip it and rip it!

Rickie has come a long way since this disaster of an outfit, but the thing is people never forget. Orange has always been Fowler’s trademark stemming from his days at Oklahoma St. However, there is such a thing as too much orange. This is too much. Ian Poulter has his own clothing line, but you wouldn’t know it by looking at this atrocious shiny gold shirt and ridiculous pants. To be honest, we’re not sure how they let him on the golf course like this. Add in some frosted tipped hair and you got yourself a winner, or in this case, a loser. Sergio’s canary yellow during the 2006 Open Championship was one for the ages. While we are sure there was some significance to it, there’s no denying it looked absurd, a fact he has since agreed with. He should get a free bowl of soup with this outfit. 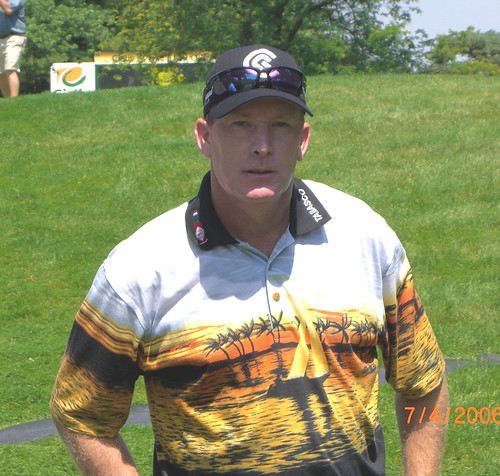 There’s no denying Woody Austin was comfortable in his own skin when he was playing on the PGA Tour. His collection of shirts always seemed to spark some sort of conversation. This one here appears to be the always classic sailboat sunset. Sweden’s Jesper Parnevik always brought the fashion heat when he came to the golf course. Between his flipped brim hat and wild colors, he made a statement with his clubs and his clothes. Even though this picture is a bit more subdued than what he was accustomed to, there’s no denying that black sweater with the white argyle belonged in a dumpster.

Japan’s Shingo Katayama’s staple was his non-traditional cowboy hat complete with the strap that holds the sides up. Combine that with whatever is going on with his shirt and pants here and you got yourself a winner. Rory Sabbatini brought the wild west out with him on the course when he rocked this giant belt buckle and the hilarious cowboy hat to top it off. While he wore the hat for health reasons, it doesn’t mean we can’t have a little bit of fun with it. Here is Bubba in all his glory during the U.S. Open. Start with a shirt that has double-breasted pockets buttoned all the way up and then throw in some camo pants – yikes. We’re surprised the USGA didn’t penalize him just for showing up in this awful outfit. Ok, so Ryan Moore’s outfit at the 2011 Masters isn’t as bad as some of the others on the list, but that still doesn’t mean it’s good. While Bobby Jones used to play in a shirt and tie, Moore looks more like a hipster straight out of the heart of Brooklyn.