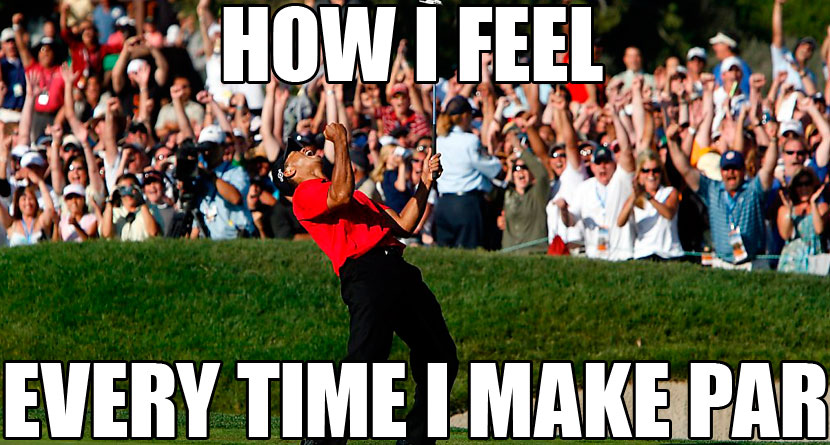 If you’ve used the internet before, you may have come across something called a meme; maybe you even chuckled upon seeing one. According to Wikipedia, a meme is “an idea, behavior, or style that spreads from person to person within a culture.”

The most common meme is an image with a witty caption that goes viral. The words and the picture play off each other to create a funny, deeper message. Usually, they are based on a feeling, an action, or really anything that a golfer can relate to.

Here are 10 hilariously popular golf memes on the internet today. This iconic image of Tiger Woods making a putt on the 72nd hole to force a playoff during the 2008 U.S. Open at Torrey Pines stands as one of the greatest moments in golf. It also happens to be the last time Tiger has won a major, but that’s neither here nor there. The beauty of this meme is the sheer elation Tiger is showing after basically playing on a broken leg and still being able to come through in the clutch.

You, on the other hand, may never have a putt to tie for the lead in a major, but you’ve probably have felt that same rush each time you get the ball in the hole in the allotted number of strokes. It could have been a ho-hum fairway, green, two-putt. Or it couldv’e been a skulled chip that hit the stick and dropped in, even though you told your buddies you meant to hit a groove low. The joy of par should never be taken for granted. In fact, it should be celebrated. So go ahead and double fist pump. You deserve it.