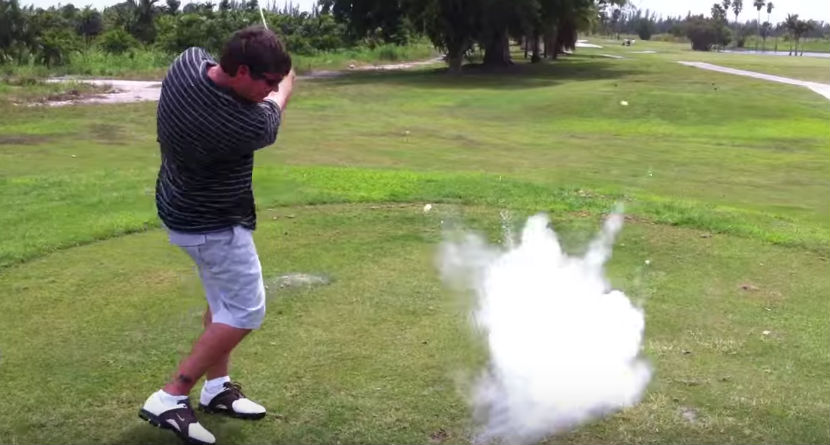 Even in the middle of a global pandemic, it’s important to see the lighter side of things at times.

As you’re stuck inside during this April Fool’s Day, enjoy a few laughs at some fellow golfers’ expense.

The driving range ball dispenser prank is exactly easy to pull off, but it is hilarious to watch. Everybody has had one issue or another using one of these things, and most of the time it isn’t your fault.

Usually, it is a mechanical problem, however, this is some good, old-fashioned fun. The prankster keeps the golfers on their toes the entire time. Just when you think it is broke, a tidal wave of balls rushes out and they scramble to collect as many as they can. In the end, they realize they’ve been had!

The fake snake prank is one of the oldest in the book, and it even works on Tour pros.

Here’s Smylie Kaufman getting the full treatment when he gets back to his bag.

The European Tour social team is one of the best in golf, and the pros are buying in. The result is some fairly hilarious material made even funnier because of the pros’ involvement.

Here is one that had us laughing the entire time when a fake reporter asked some absurd questions to the world’s best.

The air horn on the golf course is on the Mount Rushmore of golf pranks. Here are a couple of guys dressed in full camo rile up a few golfers with this timeless stunt.

As you can imagine, every time somebody swings, they blast the horn without fail. They even sneak their way out of the trees! Now that’s some pro pranking.

Another timeless golf prank classic is the exploding golf ball trick. You can pick one of these up at your local golf shop and try it out with your buddies. However, we don’t suggest using it on a friend with a temper like this!

Who Is Louis Oosthuizen?

While this prank is tough to pull off — because the chances are you don’t have a major champion at your disposal — it still is fun to watch.

Golf Digest had Louis Oosthuizen pose as an intern and did their version of “Jaywalking” asking random people to name golfers based on pictures Louis held up. Although things got awkward when he held a picture of himself up and nobody had any idea who he was.

Here’s a solid prank if you’re willing to sacrifice your driver. Normally, people will throw a rock or another ball at somebody else mid-swing. Not these guys. They go full driver toss in the middle of this dude’s swing and the result was exactly what you’d expect.

If you have a couple hundred golf balls lying around, this prank definitely should be on your list. These guys from a local radio station filled up their co-worker’s car to the brim so when he opened it, well, you get the idea!

We go back to the old fake snake prank, but this one comes at the expense of NFL QB Brock Osweiler. For somebody in the NFL, he doesn’t seem like such a tough guy.

ThDo yourself a favor, get a fake snake and throw it in your bag because you have no idea when it could come in handy.

Those damn kids and their remote control cars!

These two kids apparently crossed the line with this funny prank and their toy felt the brunt of it, not to mention they got chased on foot. Clearly, they messed with the wrong golfers on the this day.