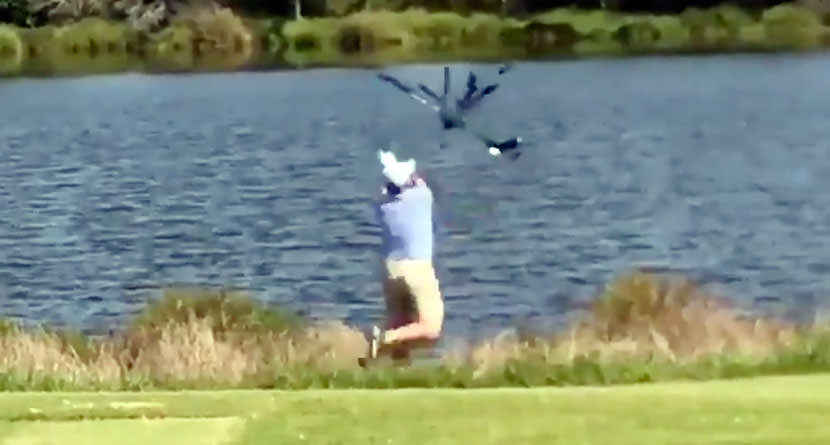 Golf tends to bring out the best and the worst of people, especially for amateurs. The thing is that most people tend to forget that they’re just that: amateurs. They don’t play the game for a living like the pros do and certainly shouldn’t expect to hit every shot perfectly.

Usually, their frustration boils over in the form of breaking clubs and excessive profanity. Here are 10 of the worst amateur meltdowns we’ve seen.

@NoLayingUp guy in our club championship this weekend had enough pic.twitter.com/jzJ2Kj03tW

Former NFL kicker Josh Scobee is a certified golf nut. Playing in his club championship in 2017, Scobee got his phone out in time to see a player who had had enough depositing his clubs in a near-by water hazard.

There is a bright side to this first temper tantrum, the WD or NC next to his name on the scoreboard may be easier on his ego than a big number may have been.

First off, you have to respect the beer bottle tee. That’s really where the respect stops after this guy couldn’t snap the head off of his driver the first time. It took his full body weight but he eventually got the job done.

This guy was on a mission right from the start of the clip. In what looks like a scene straight out of a mob movie, he takes his bag and chucks it off a bridge into the river below completely ignoring his friend’s feeble attempt to intervene. We’re surprised his long walk back to the car hasn’t been nominated for an Oscar.

This dude clearly has chopped down a tree in his day. While we don’t know the details of this specific situation, we do know he was miffed at something. His buddy caught the whole thing on camera and even got a friendly middle finger for the effort. Timber!

You know this clip is going to be special as soon as the cameraman says “this is gonna be pretty good.” After a miserable swing, he decided to take his frustration out on the poor tree. As if that wasn’t enough, he felt compelled to throw it for good measure.

“That’s How You Quit Golf”

This clip dives right into it with a guy already halfway through his bag. What we can deduce from the situation is that he is not thrilled with his sticks and has opted to show them who’s boss. If he’s not quitting as he says, he’s going to need some good scuba gear to retrieve his tools.

While we are going to cut this kid some slack for being a child, that doesn’t mean that this wasn’t one of the best tantrums we’ve seen. He lipped out this shorty and obviously was not pleased. To be honest, we wouldn’t be either. It’s alright kid, blame it on the aerated green!

The video is rolling here for one of two reasons: 1. it’s staged; or 2. the breaking point was coming. Let’s just operate under the assumption of the latter and that there was perfect timing on the videographer’s standpoint. The intent was already decided and the club breaks per second rate was pretty solid.

Maybe the only thing more frustrating than wanting to snap your driver over your leg, on the ground or with your foot is the inability to do so. Finally, the frustration of poor golf and poor club-snapping ability came to a head and the driver submitted, mercifully.

This fine gentleman wraps up our list with one of the more ridiculously animated tantrums you’ll see. After an obvious bad round, he put on a show for all to see snapping just about every club in his bag. Bravo sir! You might not have won the scramble, but you won our hearts.