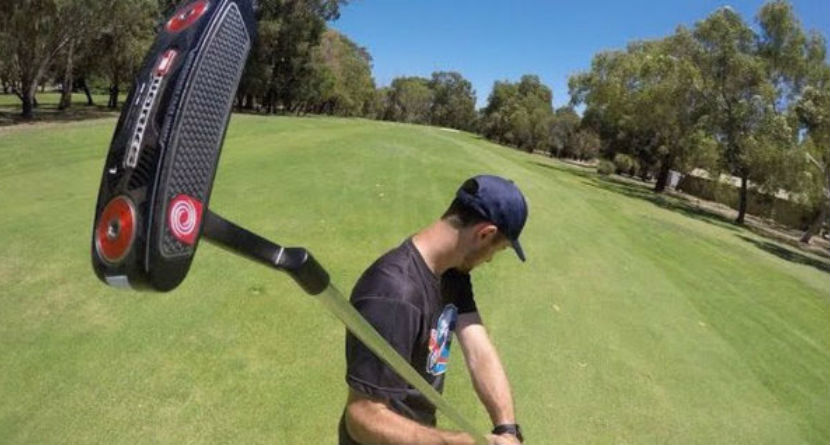 The most well-known record in golf is Jack Nicklaus’ major mark of 18. Others may argue that it’s Tiger Woods’ absurd consecutive cuts-made streak of 142. However, when you go outside the ropes beyond the professional ranks, there is a host of records that may be even more ridiculous than those.


The single most used club during any given round is your putter. While it’s normally used on or around the green, and yes, even in some cases from the rough, there are some folks out that believe it can be used from the middle of the fairway – from over 100 yards away! The guys from How Ridiculous were on a mission to break the old record that dated back to 2001 when Fergus Muir holed a 125-yard putt in Scotland.

According to Guinness World Records, team member Brett Stanford managed the historical shot at the 5th hole at the Point Walter Golf Course in Western Australia. The epic putt has been confirmed by as being from a distance of 135.67 yards!

Back on October 31, 2014, Robby Steen drove the “Bandit” into the record books at a speed of 118.76 mph, making it the fastest golf cart in the world. The cart was manufactured by Plum Quick Motors. Unfortunately, the record time didn’t take place on a golf course, but instead Darlington Dragway in Hartsville, South Carolina. Check it out.

Most holes-in-one in a single round of golf If you’re wondering why you still haven’t made a hole-in-one, it’s because Patrick Wills took them all. He set the record for most aces in a single round with three back on June 22, 2015, at Laurel Hill Golf Course in Lorton, Virginia. Check it out.

Here’s a record we don’t recommend trying at home. The farthest golf shot ever caught in a moving car was 300 yards down a runway. The crazy feat was achieved when Jake Shepherd landed the ball in Formula One driver David Coulthard’s Mercedes-Benz SLS AMG Roadster at Dunsfold Aerodrome, Surrey, UK. Check it out.

According to Guinness World Records, the tallest professional golf player ever is Marcel Pickel of Germany, who was verified as being 6’9″. Pickel played on the PGA of Germany Tour from 2010 to 2013. Check it out. The oldest living golf member of any golf or country club is Willie Cuthbert who’s belonged to Kirkintilloch Golf Club, in Kirkintilloch, UK for over 89 years. He joined the club at age 12 and is now 103! It is said that although he can’t play full rounds, he still enjoys his time at the course. Check it out.

The world’s longest golf cart measures 31 feet 6.74 inches bumper to bumper and was designed by Mike’s Golf Carts. The record was made official on May 30, 2013, in Perry, Georgia. Check it out.

Actor Anthony Anderson holds the world record for the longest “useable” golf club at 11.303 Meters. He acheived the record with the help of a few companies, including Liquid Light LLC, Topgolf, Fujikura Golf, What’s Inside?, and Callaway Golf. The groups worked together to film the attempts at a TopGolf facility, in the hopes of creating a show centered around trying to break golf record.Check it out.

These folks took the phrase “tee it high and let it fly” a little too literally. Jim Bolin set the record for world’s largest golf tee at 30 feet 9 inches. The head of the tee is 6 feet 3 inches, and the shaft is 2 feet 1 inch in diameter. The base was made from yellow pine boards glued together, then cut with chain saws. Check it out. According to Guinness World Records, the greatest distance between two rounds of golf played on the same day is 9,931 miles (15,982 km) by John Knobel from Australia who played two full 18-hole rounds. He started at The Coast Golf Club, Sydney, Australia, and then took a flight across the world and ended up playing at Forest Park Golf Club in Woodhaven, New York on May 21, 2006.