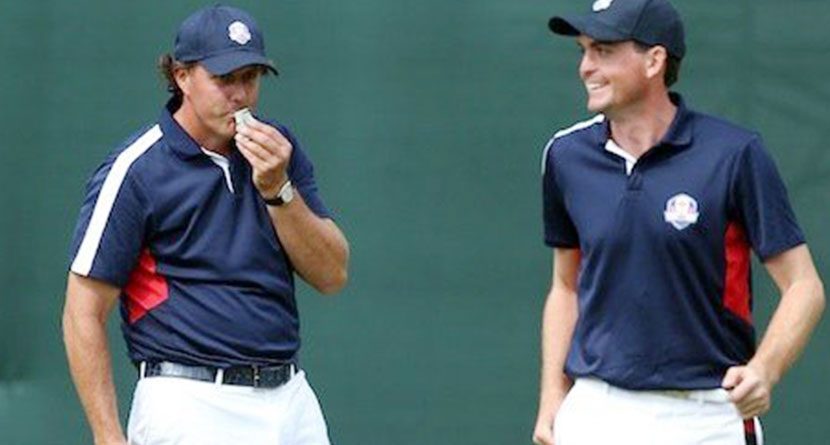 You didn’t think baseball was the only sport with “unwritten rules,” did you? Golf has its fair share.

You never talk to someone else’s golf ball, you don’t ask someone what they had on a hole as soon they make a putt for an 8 or 9 and you never settle up on your bets on the 18th green; you get to the clubhouse and have a beer in front of you before you pull out the wallet.

Those three unwritten rules and seven others were laid out by GolfWRX in an entertaining and informative list of “10 Unwritten Rules of Golf.” Here are a couple more examples.


5. Don’t hit, or even look at someone else’s golf ball

Want to see a golfer completely lose the plot? Walk over to their golf ball, bend over to look at it, then address it with a golf club.

Anyone who has had someone accidentally hit their golf ball knows there’s nothing that makes a golfer angrier. If your golf ball happens to be in the vicinity of someone else’s ball — or if there’s even a chance of it — be extra, extra careful that you’re hitting the correct one. I’ve seen disputes over golf balls turn into fisticuffs.

And, whatever you do, DO NOT hit someone’s golf ball, realize it’s theirs, and then drop the ball back in a worse lie than where you found it. Not even your worst enemy deserves that.

2. Take your ball out of the hole before someone else putts

There’s something poetic about the sound of the golf ball rolling around in the bottom of the cup. It’s confirmation that you’ve successfully completed your goal of making the putt, and your award for finishing the hole.

There are only 18 opportunities to hear that sound during a round, so don’t rob your playing partner of any of them.

Plus, you don’t want your playing partner thinking about your golf ball that’s sitting in the bottom of the cup, rather than concentrating on what he or she needs to do on the green. Maybe you’re just trying to speed up play or not get in the way of the other player, but it’s never wrong to just hurry up and grab your ball out of the hole.

We’d like to add that unless it’s been agreed upon, you always get two balls off of the first tee, don’t be stingy giving putts for double or more and always help your playing partners/competitors look for their ball.