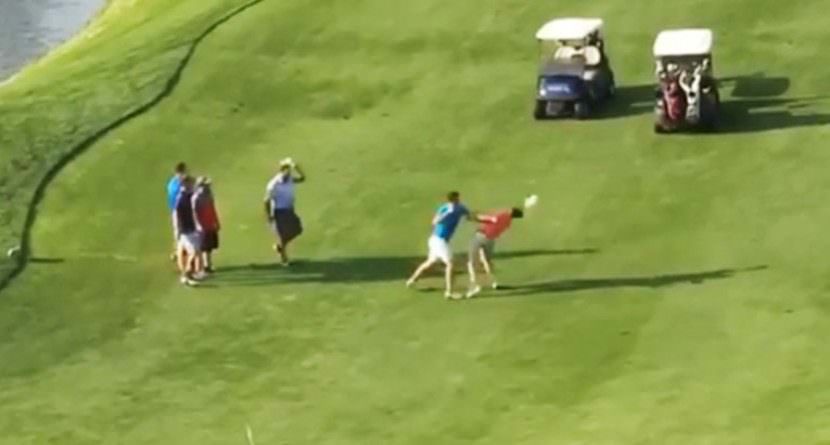 Golf is a gentleman’s game, or so they say. While the course is supposed to be a place of peace and tranquility, there are inevitably some people who don’t subscribe to that notion. Whether it was a heated rules debate, or somebody just hit into your group, the fact of the matter is that your head should always be on a swivel out there.

Here’s a look at 10 ridiculous fights that would have worked better in a wrestling ring instead of on the golf course.

Went out to my favorite course with Kevin @coloradokev and @grantjbradshaw on my last day in CO and witnessed some absolutely ridiculous #fightclub on the 18th hole after someone hit right into the group on the green. Who says white ppl don’t brawl? #golffight #denver #neverlayup #whitemalematurity #fossiltracegolfclub

This brawl was one for the ages. While we don’t know the details, we do know it escalated quickly. These guys got down to business almost instantly and went toe-to-toe like Ali vs. Frazier. After several missed haymakers, the guy in blue landed a straight jab to face knocking the other guy’s hat clear off. Two seconds later, they’re shaking hands. There’s a reason why they call golf a gentleman’s game.

This classy millennial rips what appears to be his playing partner’s bag from his cart and flinging it into the air over an obvious disagreement. After a quick cut to black, the profanity and nonsense continue well past when it should’ve ended. The biggest casualty was the $400 driver.

Fisticuffs at the 19th hole

The clubhouse bar and restaurant is the perfect place to unwind after your round, though if you are stressed from how the round progressed, maybe adding alcohol to the mix isn’t a great idea. Something clearly took place earlier in the day that one golfer took exception to and he was not shy about expressing his displeasure. The claims of cheating and thievery were enough to cause accused to put his accuser through a window, and followed up with another hit to the head.

Here we have what looks like two friends horsing around, but things got serious once one of them got airborne. The other guy kept his legs churning and drove him back right into a sign on the tee box. While there was a look of immediate concern, there was also laughter. Throw on ice pack on it and you’ll be fine!

While the fight itself only lasted a few seconds, the trash talking continued for a good solid four minutes. The kicker is that apparently nobody actually won the match they were playing. The commentary is a perfect compliment to these shenanigans.

This Is Not ‘Nam

While no punches were actually thrown, this confrontation was too good to pass up. Obviously, the gentleman in the cargo shorts, who reminds us a lot of Walter Sobchak from the Big Lebowski, was running a little hot after having being hit into for the third time. Lucky for this guy, he didn’t enter a world of pain, yet.

These two “men” got into it after a round and alcohol may or may not have played a factor. After one bro stepped in the other bro’s face, they went straight to fisticuffs and their “friends” didn’t exactly seem to mind. In fact, it looked as if fighting was the answer. Eventually, they came to their senses and broke it up.

Here’s another one on the list that’s more of a confrontation rather than blows, however, this actually happened on the PGA Tour. After an errant shot by Keegan Bradley, his playing partner, Miguel Angel Jiminez, went over to scope out the situation. One thing led to another, and the next thing we know they’re in the middle of this heated exchange.

Boys will be boys

These two boys squared off in one of the more absurd fights we’ve seen. While we respect this kid’s effort to play rules official, the other kid clearly didn’t. After several attempts of explaining the situation like Slugger White, they resorted to physical violence which didn’t end well for anybody, especially that one kid’s bag.

Never seen anything like this!! 2 groups coming to blows on the golf course! Watch the guys on the right… Dude snaps his driver over the other guy’s back! Lucky it didn’t connect with his head! INSANE!! #golf #golffight #nicelittlesaturday #fight #couldhavekilledhim #gentleman #comeatmebro

This ridiculous brawl snags the last spot on our list for obvious reasons. Again, we don’t have much context, but anytime you snap a club over a person’s back usually means things are a bit out of hand. Fortunately for that guy, he didn’t get clocked in the head.