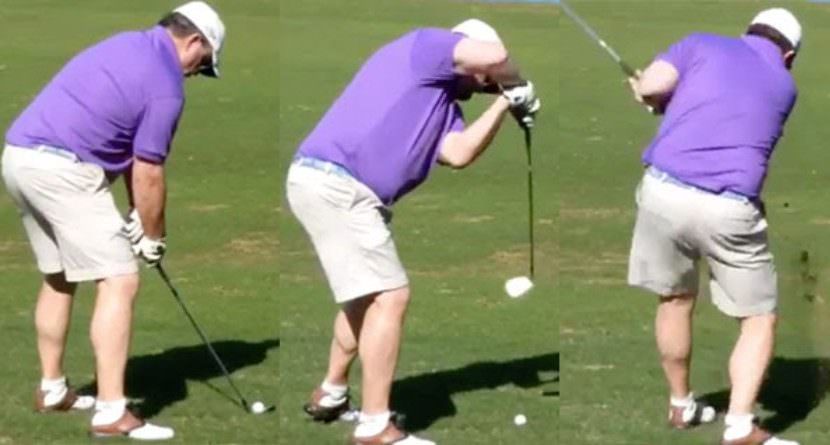 No two golf swings are the same, but hopefully, yours doesn’t look like any of these. While we can’t all have swings that look like Adam Scott or Louis Oosthuizen, we can make due with our own natural abilities and a little bit of practice. However, there are a few people that are beyond repair.

Here are 10 of the most terrible amateur swings we’ve seen.


Initially, this kid’s set up doesn’t look too bad, but as soon as he drops down flattening the club things get interesting. From there, he picks it straight up into the air, and puts a half-decent decent move on it. While the scorecard doesn’t have pictures, you don’t want to copy this swing.

This guy totally whiffs like an amateur but plays it off like a true professional. If we didn’t know any better, that looks like a practice swing. Well, not really, but we’ll give him the benefit of the doubt.

This guy has one of those unique swings that you are thankful you don’t have. Once you get past the two gloves, you’ll notice he takes the club back somewhat normally, then flips it forward for some reason, maybe for timing purposes (we’re being generous), cocks it back and releases it making actually decent contact. All we can say is wow!

While we don’t know for sure if it was this guy’s first time swinging a golf club, it’s apparent he was a little steep with it. The fact he was able to keep the club intact without breaking his wrists was impressive.

Tiger Woods eat your heart out. Took some time out of my busy schedules to show you youngsters how NOT to golf. #Golf #Montreal #Coke #GoodTimes #Instafamous #Fail #GolfFail #FlipFlops #FlipFlopsEverywhere @lumskis lol

Here’s a guy who appears to want to analyze his swing, but we’re not sure if that’s such a good idea. He takes the club back and then pauses to make sure the camera was rolling, which it was, and then transitions downwards completely missing the ball and making himself look like a fool in the process.

Hopefully, this isn’t actually this kid’s swing because, man, is it bad. He takes the club back in all different directions and then loops is back around like a modern day Jim Furyk. He doesn’t make very good contact and we are not surprised.

Judging by this dude’s address, he looks like an athlete. Using the rare cross-handed approach with driver, he brings the club back and uncorks it on the way down, completely missing the ball twisting himself right into the ground. It sure does make for some great entertainment!

Whenever your ball lands in or around a hazard you have to do whatver it takes to get out and back on solid ground. This woman chose several different positions to hit her ball out of this trap, and not only failed to do that, but ultimately joined her ball in the sand.

This gentleman leads us off with a hitch in his swing like no other. While releasing the club can be scary, you need to let it go at some point. Chances are it would be a long day if you were playing with him.

Did You See It?

We think this would classify as an armsy swing considering the fact he literally doesn’t use his lower body at all. After making a weak swipe at the ball, our friend here barely knocks it off the tee. What really got us was the guy’s reaction behind him. Something about the slo-mo makes it even better!