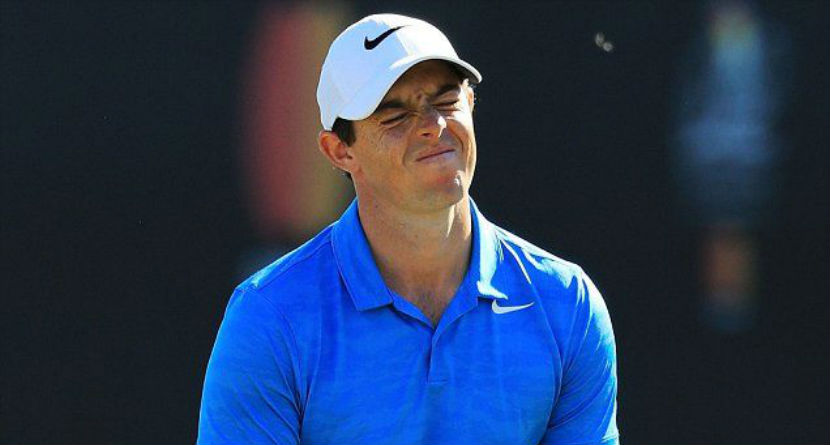 Whether you are a major champion or a weekend warrior, one thing remains consistent: putting is hard.

Here are 10 of the most ridiculous Tour pro putting meltdowns we’ve seen.

Ernie Els has the pleasure of leading us off with one of the worst nightmares all golfers can relate to. Not even a four-time major winner can escape the dreaded yips. The only difference is that this took place on the first hole of the Masters with TV cameras, galleries, etc. Not your local muni. Els begins by missing what seems like a simple two-footer, and then it snowballed from there. Granted the greens at Augusta are like putting on glass, it doesn’t make this unfortunate incident better.

In recent years, the Hall of Famer had developed a case of the yips from short range. He started to experiment with going cross-handed and then even went to the belly putter for a brief sting before it was deemed illegal. Hey, putting is hard!

Sergio Garcia makes his presence felt early on the list with this tennis match he played with himself during the 2016 Players Championship. We are going to give him the benefit of the doubt and say it was a five-putt considering he was off the green on the first attempt. Regardless, it was terrible.

We go back to the archives for this epic five-putt from none other than Phil Mickelson. During the 2002 Players Championship, Phil was in the driver’s seat after he fired a first round eight-under 64. However, this quadruple bogey derailed his chances. It was so out of character even Johnny Miller said, “Do you believe this, Roger?”

Michael Clayton is one of the best pros to ever come out of Australia, but this brain freeze is perhaps his best-known moment.

Brandt Snedeker 4-Putts the 72nd Hole at the BMW Championship from Stephanie Wei on Vimeo.

Brandt Snedeker is usually a lock on the greens with his patented pop stroke. However, nerves can do some wild things to even the world’s best players. Here he is during the 2009 BMW Championship needing two putts to keep his FedEx Cup playoff hopes alive. He didn’t just go down. He went down in flames.

Rory’s no stranger to four-jacking a green or two in his day, and this example is no different. We go back to the 2014 BMW Championship contested at Cherry Hills Country Club where Rory four-putted from inside of five feet! Woof.

There have been plenty of cringeworthy missed short putts, but this one from John Daly in a playoff against Tiger Woods ranks right up there.

2011 Masters champion Charl Schwartzel would rather not remember this pathetic putting display during the 2012 Deutsche Bank Championship. After lipping out the first two from inside of four feet, he figured he’d try it backhanded and the result was exactly what you think it would be.

Brooks Koepka had quite the adventure during the 2015 Farmers Insurance Open when he five-jacked the 18th green. After completely misreading his first putt for eagle, he left himself a nasty downhill slider which he missed, then missed again, and then missed again. Finally, after a brief walk and head scratch, he buried it for a double bogey seven.

We go to the European Tour for this gem from South African Hennie Otto. After just missing the first putt on the 12th hole of the 2005 Nashua Masters, he completely melts down. Five putts later he walks away with a 10.