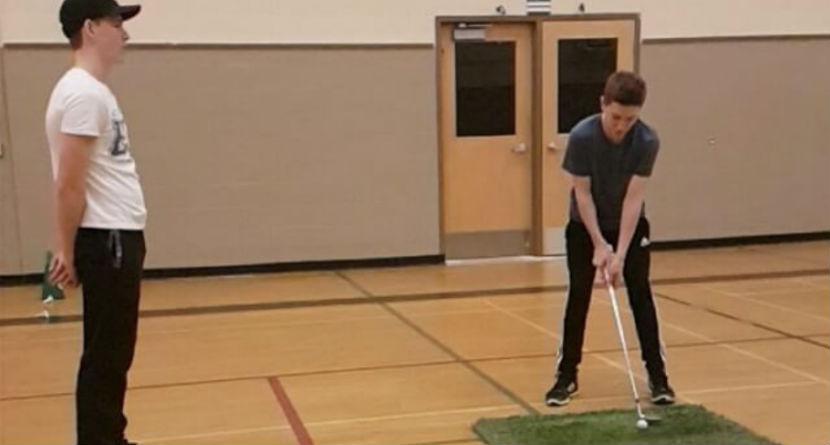 Golf trick shots take skill, precision, and sometimes a little bit of luck. Unfortunately, you will find none of those on this list. From golf balls to the face to broken drivers, here are 10 hilariously awful trick shot bloopers.

Phil Mickelson set one of the gold standard of trick shots when he perfected his patented backward flop shot. You know the one where he goes full swing with an open face lob wedge launching the ball skyward, and more impressively backward? Yeah, that one.

Ever since he showed the world his baby, people have been trying their best to replicate it.  While there are the few that can actually pull it off, the majority cannot, and when they don’t it usually isn’t pretty. Take this guy for example. He’s got the right idea with the setup, but the issue was the execution. Judging by the sound of glass shattering and the uncontrollable laughter.

Somewhere Phil is giving this dude a thumbs down.

Here are a couple geniuses that thought it would be a good idea to attempt the ally-oop trick shot from the sand. First of all, while we respect the confidence, it’s a little overly ambitious to think you are going to hit the perfect bunker shot on command unless you’re Phil. Secondly, the fact this guy hit his buddy in the groin region is one thing, but the fact that they had multiple camera angles made it exponentially funnier.

Here we have another duo ready to break on to the trick shot scene. The first guy gets fancy showing off his skills with a wedge, even including a nice little stall on the brim of his hat. The issue is what happens when he passes it off to his overly anxious friend. After a perfect toss, the dude winds up and makes contact precisely where you’re not supposed to make contact with a 460 CC driver head, causing the shaft to snap. Yes, we’re also glad you got that on camera!

What’d They Think Would Happen?

As straight forward as a trick shot gets, it appears all this guy wanted to do was hit it over his buddy’s head from point blank range, indoors in the middle of a kitchen. Whatever made this brave soul agree to try this stunt we don’t know, but he takes one right in his manhood. Serves him right!

Yet another tandem trick shot, these guys failed miserably as soon as the dude swinging the driver drop kicked the ground prior to making contact with the ball. The head goes flying and the other guy can’t help but laugh. He then takes a hilarious walk of shame to retrieve the head.

You Cannot Be Serious!

While most of these trick shot bloopers are the result of something going hilariously wrong, this trick shot artist did everything right except pick a deep enough hole. All three putts were perfect and he even threaded the needle with the third and final ball only to see it come back into the cup and bounce over it because of the two putts he already made. Adding insult the injury, whoever was filming the trick got some sinister joy out of seeing it fail.

One thing’s for sure attempting golf trick shots could be hazardous to their health. Here we have a guy who was trying one that’s currently making the trick shot rounds when you stack two balls on top of each other, hit the bottom one, make the top one pop up and then hit it out of mid-air. Unfortunately for him, he didn’t make it passed step two.

Yet another Phil Mickelson inspired trick shot attempt, yet another epic fail. While the technique is there, the execution is clearly not. This good friend takes one right off the noggin, but that doesn’t stop him shaking it off and kicking the ball back. If at first, you don’t succeed, try again.

This duo was trying to pull off another popular trick shot where you essentially tee it up off a body part of your buddy. First of all, the tee placement is questionable. Second, the problem here is they failed to account for his head and right on cue, boom. Maybe next time wear a helmet or better yet, don’t ever try this again.

Trick shots are always more fun with friends. Here’s one that had disaster written all over it but somehow managed to avoid the guy on the end. At least everyone had a good laugh!