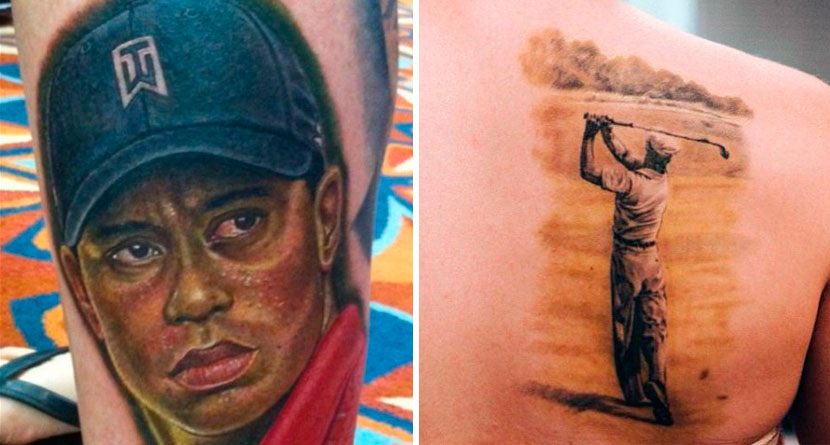 While tattoos may not be for everybody, it does not mean you can’t appreciate it considering that like golf, tattoos are a form of art. Here are 10 must-see golf tattoos. Ben Hogan’s iconic 1-iron shot at Merion during the 1950 U.S. Open was one for the ages, and so is this tattoo. Everything about the original photo is captured with a little twist. The original photo has the gallery crowded around him forming a narrow gap to hit the ball through. This person decided they wanted to show off what Hogan saw, blocking out anything except the target. Even the attention to detail with the shaded wrinkles on the shirt and pants was captured. Golf clap! This aggressive tattoo combines two of our favorite things; golf and drinking. The owner of this artwork clearly enjoys a martini and may or may not have had a few before deciding to get this inked on to his arm. The ball appears to have just landed in the glass which conveniently has a flag with the #13 instead of olives. Hopefully, somebody yelled fore! Technology offers a wide variety of swing analysis nowadays, but nothing compares to checking your angles on your own skin. It appears the focus is on the arc of the swing, and at first glance, this person might have one of the better moves through the ball we’ve ever seen. Everything is in perfect balance and we’re sure that hair will grow back eventually. We aren’t sure whether to smile or cry at this tat of Tiger Woods in his Sunday Red. While it almost seems life-like with the beads of sweat, something about the rosy hue on the cheeks is a little suspect. Hopefully, this person hasn’t had any back surgeries or develop a case of the chipping yips. This picturesque scene on this person’s back makes us wish we were there. Where this is exactly, we don’t know, but anytime you combine mountains, palm trees, and a meandering river with a putting green you got our attention. Our guess is that it’s Hawaii.

Words To Live By Here are some interesting words to live by. While it’s no “grip it and rip it,” the tone is similar, and the shield-like symbol gives it some credibility. Life’s too short to only take one or two putts. Make it count! There is something magical about this tattoo with the Seve Ballesteros fist pump silhouette and the Claret Jug. We are just going to assume this person is from Europe and calls it the Open Championship. Here we have a three-dimensional driver and hands as if this person is waiting on the tee and ready to rip it. The attention to detail on the driver with the hosel and grooves are very well done. When in doubt, always let the big dog eat. There’s a lot going on here, but what stands out if the golf skull and clubs. In what looks like a tribute to the band Guns and Roses if they played golf, this calf tattoo pops especially with the red flowers and 3-D shading. The pinup girl tattoo has been a staple in the ink world for a while now, but adding a golf component takes it to the next level. Decked out in argyle, this lovely lady seems like she definitely doesn’t lay up. Fore please!