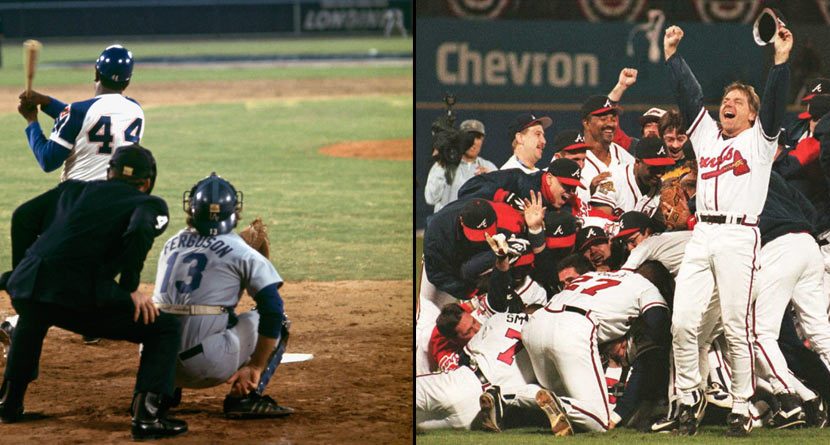 The PGA Tour season comes to a close this week in Atlanta with the Tour Championship. The top 30 players in FedExCup points vie for the playoff title and the $10 million prize that comes with it. The top five players control their own destiny.

While these 30 players look to create their own history, the city of Atlanta has enjoyed plenty of great sports moments of its own. With names like Hank Aaron, Greg Maddux, Chipper Jones, Michael Vick, Tony Gonzalez, Dale Murphy and Dominique Wilkins, you might not think there’d be too much room for golf on this list — but you’d be wrong. Here are the 11 most memorable moments in Atlanta sports history:

There isn’t much to cheer about in Atlanta Hawks history, but from 1984-1992 there was Dominique Wilkins. He electrified fans for the better part of a decade with his acrobatic and powerful slam dunks. Back when it meant something, Wilkins won two NBA Slam Dunk Contests in 1985 and 1990. In 2006, he was inducted into the Naismith Memorial Basketball Hall of Fame.

Bo Jackson may have been the first, but Deion Sanders was the flashiest of the two-sport stars. From 1991-93, Sanders was the face of sports in the ATL. He patrolled the outfield for the Braves during the summer, and through the fall and winter was one of the most feared corners in the league. Sanders is still the only athlete to have played in both the Super Bowl and the World Series. In 2011, Sanders was inducted into the Pro Football Hall of Fame and currently works as an analyst for the NFL Network.

In 2001, David Toms was one of golf’s brightest stars. After struggling to gain traction on the PGA Tour early in his career, he emerged as one of the game’s best in 1997 and continued to play well through the early part of the new millennium. In 2001, Toms won three times, including his first major championship. At the PGA Championship at Atlanta Athletic Club, Toms held off Phil Mickelson to win. The lasting memory of the week came on Saturday when Toms made an ace at the par-3 15th hole to help power him to victory.

In 1998, the Atlanta Falcons enjoyed their greatest season in franchise history. Led by head coach Dan Reeves, quarterback Chris Chandler and running back Jamal Anderson, the “dirty bird” Falcons ran all the way to Super Bowl XXXIII. On Jan. 18, 1999, the Falcons toppled the No. 1 seeded Minnesota Vikings in an overtime thriller to earn their way into the big game. To this day, it’s arguably the biggest win in franchise history. During one of the greatest periods in Atlanta sports history, the 1996 Summer Olympics took place. Sandwiched between the Braves’ World Series title and the Falcons’ run to Super Bowl XXXIII, the Atlanta Olympics saw the United States win 101 medals. The next closest nation in the medal count was Russia with 63. While not memorable but most certainly unforgettable, a cloud was cast over the games due to the Centennial Olympic Park bombing that killed two and injured more than 100. Also of note, current Augusta National chairman William Porter Payne served as the chairman and CEO of the Atlanta Committee for the Olympic Games.

In the fall of 1995, arguably the most important race in NASCAR history took place at Atlanta Motor Speedway in Hampton, Ga. Six drivers were mathematically alive in the championship, but just three — Bill Elliott, Alan Kulwicki and Davey Allison — had a legitimate chance. At the end of the day, Elliott won the race, but Kulwicki won the championship — by just 10 points. Allison, who was swept up early in a wreck, finished third in series points. Championship chase aside, the race was more important for the sport thanks to the fact that it was where the symbolic torch was passed — Richard Petty ran his final Cup series race while Jeff Gordon ran his first. Months later, the race would become even more important following the untimely deaths of two of the sport’s rising stars — and two of the combatants that day. Series champion Kulwicki was killed in a plane crash in April 1993, while Davey Allison perished in a helicopter crash that July.

In 2001, the Atlanta Falcons drafted Michael Vick with the first overall pick in the NFL draft. From there, Vick not only electrified the city of Atlanta, but the entire league. Vick did things on his feet that the NFL had never seen before from a quarterback. Despite numerous off-field issues and a broken leg during the 2003 preseason, Vick was a sports icon in Atlanta. In 2005, the Falcons enjoyed their best season since going to Super Bowl XXXIII, finishing 11-5. Vick became the first QB to rush for more than 1,000 yards and the Falcons ran all the way to the NFC Championship Game, where they eventually lost to the Philadelphia Eagles.

It’s not too often that someone wins on their game’s biggest stage in their very first attempt. Call it beginner’s luck or the bliss of ignorance, but sometimes it happens. In 2011, that’s exactly what Keegan Bradley did. At the PGA Championship, two relatively unheralded players — Bradley and Jason Dufner — dueled down the stretch at Atlanta Athletic Club. At the end of the day, Bradley made too many long, clutch putts and was able to claim his first major championship. Since then, the two have become the best of friends and Dufner has added a PGA Championship to his own collection.

In 1992, the Atlanta Braves were in the early stages of their dominance. Coming off a loss to the Minnesota Twins in the 1991 World Series, the Braves looked to redeem themselves. They squared off against the Pittsburgh Pirates and league MVP Barry Bonds in the National League Championship Series. In Game 7, first baseman Sid Bream etched his name in Braves history when he scored the game — and series — winning run. The loss effectively ended the Pirates’ string of success and began a streak of unmatched futility. The Braves eventually lost to the Toronto Blue Jays in the World Series, but their three-run ninth inning comeback is still considered one of the greatest in baseball history.

Major League Baseball’s all-time home run record is still one of the most hallowed in all of professional sport. For 39 years, Babe Ruth held the record with 714 career homers. The game’s most prolific slugger finally lost that title in April 1974 when Hank Aaron took the Dodgers’ Al Downing deep for the 715th homer of his career. Aaron finished with 755 home runs. That number stood for 33 years, until Barry Bonds broke the record in 2007 and finished his career with 762 homers.

The biggest moment of them all for the city of Atlanta came in 1995 when the Braves finally won the World Series. By defeating the Cleveland Indians, 4-2, in seven games, the Bravos gave Atlanta it’s first championship. Game 6 saw a masterful one-hit performance by future Hall of Fame pitcher Greg Maddux and closer Mark Wohlers. David Justice provided the only offense with a solo home run in the bottom of the sixth inning. The win came in the first year of the team’s remarkable run of 10 consecutive division titles. In all, the Braves have been to the World Series five times since moving to Atlanta. To this day, the Braves’ title is the only championship won by any Atlanta team in the four major sports.