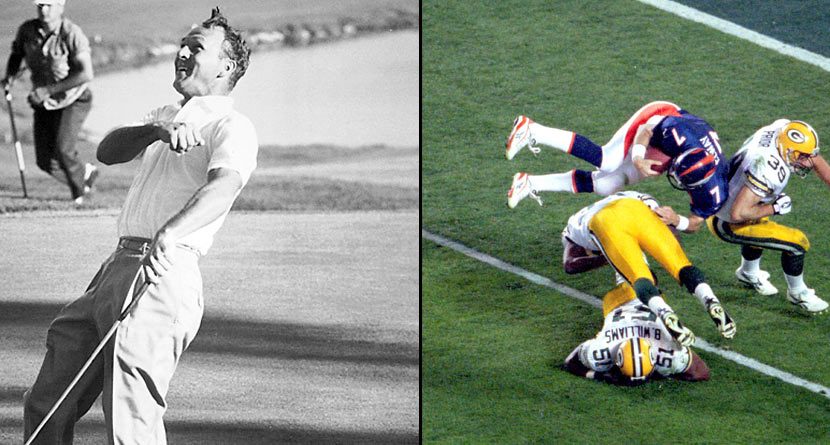 As the PGA Tour transitions from the east coast to the Rockies, it’s time to reminisce about the most memorable moments in Denver sports history. While the city doesn’t quite have the sports history of New York or Boston, it still boasts moments that send chills down your spine when you relive them.

From Tim Tebow’s surprise playoff win to the seemingly countless John Elway moments, Denver sports teams have given their fans plenty to cheer about.

With names like Elway, Larry Walker, Todd Helton, Carmelo Anthony, Joe Sakic, Patrick Roy, Peyton Manning and Terrell Davis, you might not think golf would make its way onto the list — but you’d be wrong. Here are the 11 most memorable Denver sports moments:

It could be argued that Tim Tebow was the greatest college football quarterback ever — though his skills, it was said, wouldn’t translate to success in the NFL. After a dismal 1-4 start to the 2011 season, Tebow replaced Kyle Orton as the Broncos’ starter and went 7-4, helping the Broncos make the playoffs. They met the Pittsburgh Steelers in the Wild Card round where the miraculous Tebow found another way to win:

In 1990, Phil Mickelson was one of the golf’s budding young talents. His collegiate career was one of the greatest anyone has ever experienced. He won three NCAA Individual titles, three Haskins Awards and even a PGA Tour event — the 1991 Northern Telecom Open. He also won the U.S. Amateur at Cherry Hills Country Club in 1990. At the same place where Arnold Palmer and Ben Hogan made history decades before, Mickelson also added his name to the record books, becoming the second player ever (joining Jack Nicklaus) to win both the NCAA and U.S. Amateur in the same season.

In 1984, the Denver Nuggets and Detroit Pistons locked horns in the highest-scoring game in NBA history. Described by one player as a game where “no one could miss,” the Nuggets eventually lost the game, 186-184, in triple overtime. While some will argue this shouldn’t be on the list since the Nuggets lost, it was still very memorable. Some time later, Nuggets forward Kiki Vandeweghe reflected on the game and its aftermath saying, “both teams were knocked out for three or four days. I think both teams lost like three or four straight.”

Up until 1996, Denver had been a tortured sports city. Without championships from the Broncos or the Nuggets, the Denver faithful wondered if that faith would ever be rewarded. In 1996, it was — but not by either of the two teams they’d expected. The city’s first major sports championship came from its new NHL team. When the Quebec Nordiques moved to Denver at the beginning of the 1995-96 season, the Colorado Avalanche were born. The Avs were loaded thanks to the historically one-sided Eric Lindros trade a few years earlier when the team was still in Canada. They added legendary goaltender Patrick Roy during the season and the rest — as they say — is history:

Perhaps the most memorable moment in Denver sports history prior to 1997, “The Drive” was the defining moment of Elway’s Hall-of-Fame career until Super Bowl XXXII. Trailing against the Cleveland Browns in the 1987 AFC Championship Game with just over five minutes on the clock, Elway led the Broncos on an improbable scoring drive to tie the game, which has become known simply as “The Drive.” To this day, it’s one of those highlights that you watch, knowing the outcome, and still can’t believe it happened:

In 2012, Peyton Manning and the Indianapolis Colts parted ways. Colts owner Jim Irsay felt like Manning was on his way out and that Andrew Luck was ready lead the team. For this, the Denver Broncos were very, very thankful. They landed themselves a surefire, first-ballot Hall of Famer and a field general in Manning. Since Manning showed up in the Mile High City, the Broncos have gone 26-6 and made their first Super Bowl appearance since Elway walked away a champion in 1998.

Coming into the 1960 U.S. Open at Cherry Hills, Arnold Palmer was already a two-time major champion. He’d already won five times on tour that year — including the Masters. At the U.S. Open, however, Palmer didn’t play his best golf — until Sunday, that is. Palmer trailed Mike Souchak by seven strokes entering the day, but began his final round with four straight birdies on his way to a front-nine 30. He eventually won by two strokes over a highly-touted amateur named Jack Nicklaus. After holing his final putt, Palmer famously tossed his cap into the air before heading off to sign his scorecard, giving us one of golf’s most enduring images:

After years of success from its hockey and football teams, the city of Denver finally got to celebrate something on the baseball diamond. After their creation in 1993, the Colorado Rockies were not competitive on a consistent basis. From 1998-2006, the Rockies finished under .500 eight times. In 2007, however, they were the Cinderella story of the league. On the strength of 13 wins in their final 14 games of the regular season, the Rockies faced the San Diego Padres in a one-game playoff. They won that game in 13 innings and continued streaking right on into the playoffs. After completing series sweeps of the Philadelphia Phillies and the Arizona Diamondbacks, the clock struck midnight on the Rockies’ run when the Red Sox swept them in the World Series. But for one “Rocktober” in 2007, baseball was king in Colorado:

Ray Bourque may be a name more synonymous with Boston’s sports history than Denver’s, but his crowning moment came with the Avalanche in 2000-01. From 1979 to 1999, Ray Bourque was one of the greatest players in the NHL. Possessing one of the most accurate shots the game has ever seen, Bourque scored 410 times in his career and is considered by many to be the greatest defensemen of all time. Despite many trips to the playoffs, the Bruins failed to capture a Stanley Cup title during Bourque’s tenure. Desperately wanting to see their star get his name on the Stanley Cup before he retired, the B’s traded Bourque to Colorado. In what would be his only full season in Denver, the Avalanche defeated the New Jersey Devils in seven games to give Bourque a hero’s send off:

The goal in sports is to always go out on top — and that’s exactly what Broncos quarterback John Elway did in 1999. With years of frustration and questions about Elway’s ability to win big games erased the year before in Super Bowl XXXII, it was time for Elway and Co. to go back-to-back. The Broncos squared off against the Atlanta Falcons, who were coached by the man who had taken Elway and the Broncos to three Super Bowls earlier in his career — Dan Reeves. Elway and the Broncos proved to be too much, and became the first team to repeat as Super Bowl champs since the 1993-94 Dallas Cowboys:

Entering the 1997-98 season, John Elway and the Broncos had been shut out in three trips to the Super Bowl. The last time they appeared in the big game, they were embarrassed by the San Francisco 49ers, 55-10. Questions about whether or not Elway could win the big game abounded. It was the only thing missing from his Hall-of-Fame resume. Elway led the Broncos to Super Bowl XXXII where they faced league MVP Brett Favre and the reigning Super Bowl champion Green Bay Packers. During the game, the Broncos leaned heavily on running back Terrell Davis — but it was Elway’s “helicopter” run that became the defining moment:

Elway and Broncos went on to win 31-24, claiming the first Super Bowl title of Elway’s career and the first in franchise history.