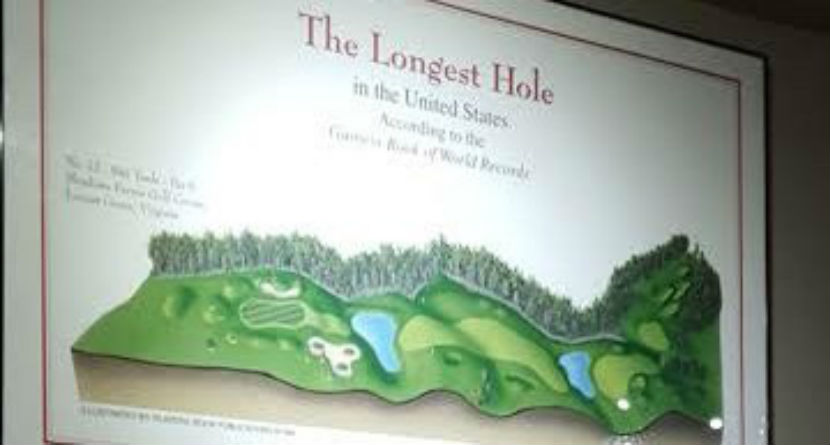 The longest hole in the United States yielded one of the most incredible albatross stories you’ve ever heard. Why was it so impressive? Well, the hole was a 841-yard par-6 and the person who did it is 15-years-old! In literally a one in a million shot, Michael Wallace, who has only been playing the game for 16 whole months, jarred his third shot with his trusty 3-hybrid from about 200 yards out at Meadows Farm Golf Course in Locust Grove, Virgina.

Granted the hole was only playing 720-yards that day, the high school sophomore’s story was so incredible, even the Richmond Times-Dispatch picked it up:

“I was just hoping to (reach the green) in 3,” Wallace said. “I’d never done that before. I’d never played the hole in better than 6 before.”

He said he noticed “a little wind at my back” as he prepared to launch his third shot from an uphill fairway lie about 200 yards from the green.

“I hit it clean, but I wasn’t sure it was going to get there. What can I say? God must have been looking down on me.” Certainly, the gods of golf were paying attention. Wallace’s third shot landed on or near the front fringe and skipped onto the large, undulating putting surface. But neither he nor his playing partners — his father, Ricky, and his godfather, Randy Wood, — saw the ball reach its destination. Wood and Michael rode to the green in a cart while Ricky continued to do battle with the monstrous hole.

“I couldn’t find my ball when I got to the green,” said Michael Wallace, a sophomore at Massaponax High School in Fredericksburg. “I looked everywhere. I walked to the back of the green. I thought, ‘Well, OK, maybe it skipped over (the green). But I didn’t see it there, either. Finally Randy said, ‘Just to be sure, maybe you should look in the hole.’”

This 15-year-old made WHAT on a 720-yard par 6? Yes, an albatross. Incredible: https://t.co/GYroEmwaN9 pic.twitter.com/ffiuk9fcvg

So he did. His ball was wedged between the flagstick and the inner lining of the cup. Said Wallace: ”I couldn’t believe it. I didn’t know what to do. I just ran to Randy and gave him a big hug.”

Unfortunately, Wallace’s round was cut short by thunderstorms, but it will be a memory he will never forget!