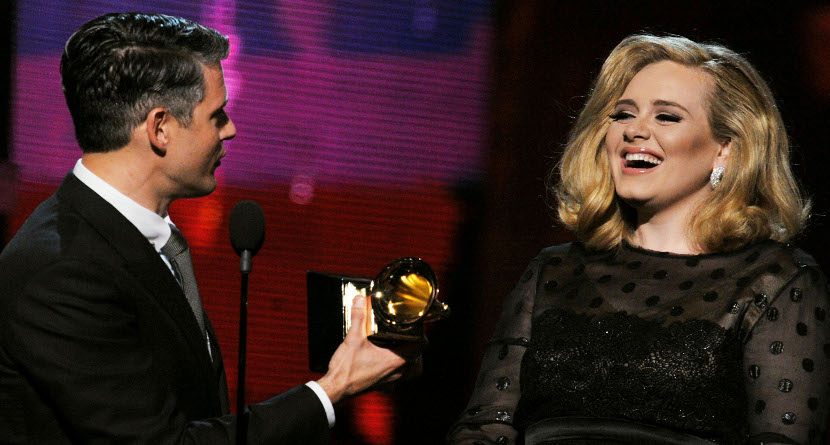 With the PGA Tour stopping in Pebble Beach the same week as Sunday’s 55th Annual Grammy Awards, I got to thinking about how the world’s best golfers compare to today’s best contemporary musicians.

Disappointingly, Bubba Watson, Rickie Fowler, Hunter Mahan and Ben Crane are not expected to perform as the Golf Boys at this year’s ceremony; however I am of the opinion that “Oh Oh Oh” should have been nominated for best single by an athlete in 2012.

Not only do Marcus Mumford and Rory McIlroy sport shaggy dos, but both took America by storm in 2012.

Of course, McIlroy won the PGA Championship in dominant fashion and supplanted placeholders Luke Donald and Lee Westwood as the world’s No. 1 golfer before joining forces with Tiger Woods at Nike.

Mumford’s “Babel” is the odds-on betting favorite to win Album of the Year.

The U.K. folksters have come a long way from a cameo appearance alongside Avett Brothers and Bob Dylan at the 2011 awards show, just as McIlroy has matured into the world’s dominant player.

2012 FedEx Cup champion Brandt Snedeker is the hottest player in golf. fun. had arguably the catchiest single of the year with “We Are Young,” though Carly Rae Jepsen (“Call Me Maybe”) would probably disagree.

The clubhouse leader in FedEx Cup standings through the first month of the 2013 PGA season, Snedeker has a pair of runner-ups and a third-place finish in his first four events of the season.

Much like the 2007 PGA Tour Rookie of the Year, the band fun. is an up-and-coming American group celebrating the freedom of their youth in their Record-of-the-Year-nominated hit song.

Snedeker, ranked sixth in the world, holds the lead at Pebble Beach heading into the final round, and he looks poised to capture his first victory of the season.

Coincidentally, fun. are nominated for six Grammy Awards, and I would not be surprised to see both walk off the stage with trophies this weekend. Next to Mumford and Sons, Frank Ocean may be the hottest artist out right now.

Nominated for Album of the Year (“Channel Orange”), Record of the Year (“Thinkin’ Bout You”) and Best New Artist, Ocean has the look of an enduring artist who could one day win as many music awards as Woods has won majors.

Expect Ocean to be a strong No. 2 at the Grammy Awards, a la Tiger Woods in his bid to overtake his new BFF, McIlroy, as the best golfer in the world.

Dr. Dre and Fred Couples may be elder statesmen, but they can both hang with the younger generation.

Much like Dre changed the headphone industry as the CEO of Beats, Couples lead a whole new generation of spikeless golf shoe wearers with his flat-bottom Ecco’s.

Like Sinatra in his heyday, these guys are the epitome of cool, but neither is up for an award this weekend.

Eric Church and Adam Scott are favorites among their female fans for obvious reasons, but both men pack a punch in their chosen profession.

World No. 7 and 18-time professional winner Scott is in the conversation as the best golfer without a major. After finishing in the top 15 of all four majors in 2012, including a second place finish at the Open Championship, Scott is a strong contender to win a breakthrough major in 2013.

Eric Church hopes to win his first Grammy Award on Sunday. The country crooner is up for Best Solo Country Performance for his 1980s-nostalgic love song “Springsteen.”

Mickelson and White are virtuosos with as much creativity and control over their instruments as anyone who has ever played them. Mickelson wields a set of Callaways, while White will play just about any type of guitar he can get his hands on. Both have been known to disappear from the peak of their profession for stretches at a time, but they are both on top of their games again.

White, who is no stranger to the Grammy stage, is being considered for Best Rock Song (“Freedom at 21”) and Best Rock Album (“Blunderbuss”).

Much like Mickelson at Augusta in 2004, Jack White hopes to set himself apart as a solo artist with his first Grammy victory in 2013. Many critics say that Justin Bieber and Rickie Fowler are more flash than substance, but I challenge you to listen to any Justin Bieber song on the radio without singing along.

You may hold back through the first three or four listens, but after the fifth time hearing “Baby”or “Boyfriend,” it is impossible to resist the chorus.

Fowler, who won on Tour for the first time in 2012 at the Wells Fargo Championship in Charlotte, is widely perceived as a flashy guy whose claim to fame is being the kid with the flat-brimmed Puma hat who wears bright orange from head-to-toe on Sundays.

However, his breakthrough win in a playoff over Rory McIlroy and D.A. Points proved that Fowler is here to stay. Just like the Biebs.

John Huh and the popular folk band from Denver have more in common than meets the eye.

Nominated for Best New Artist, The Lumineers finished strong in 2012 much like Huh, who was named last season’s PGA Tour Rookie of the Year.

The Lumineers and Huh both overcame hardship in recent years to reach their current elevated status.

Though Huh likely never had to crash on friends’ couches for an extended period of time during his rise to fame, he had to spend three years on the Korean professional golf circuit from 2009-2011 after he was ruled academically ineligible to play at Cal State Northridge as a freshman.

Both have careers that are on the rise.

OK, the Gangnam Style guy has a name: PSY.

But just as most people know the South Korean rapper/dancer as the creator of the most catchy (or annoying) song of 2012, Ben Crane is arguably better known for his mashups as leader of the Golf Boys, with Bubba Watson, Rickie Fowler and Hunter Mahan than for his play on the course.