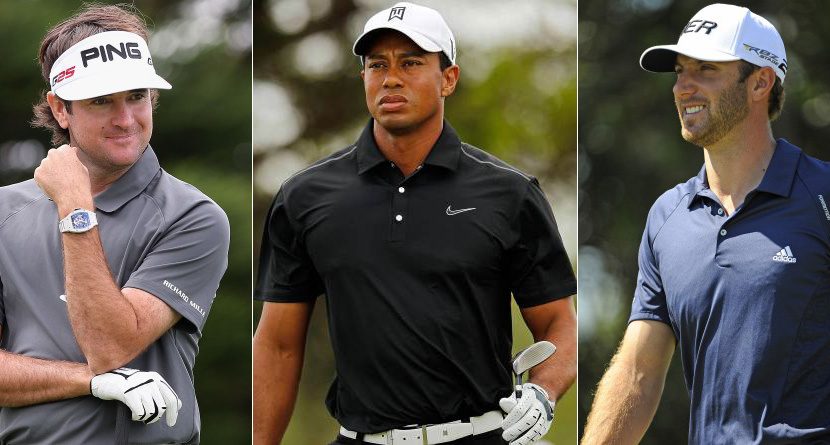 With the 2013 NBA Draft upon us, Back9Network naturally began debating about who could draft the best team. Ideas on a format were tossed out — some good, some not so much — and finally we settled on a way to settle the debate. Our writers would draft the best basketball teams possible by using golfers.

The rules: Random draw to select the order; reverse snake format; rosters needed five active pros, one amateur and one legend to serve as coach; and draft using “basketball logic,” i.e. this guy is tall so he can play. Pretty simple.

Some picks were obvious, others were questionable. Some selections were genius, yet others were made for comedic value. Smack talk ensued, insults were lobbed, and some props were thrown out. Below is what transpired.

Jon Ackerman: With the first pick I’m taking… Tiger Woods. He’s my Kobe Bryant — a little banged up at the moment but you know he won’t quit, he’s not afraid to take big shots, and at the very least, he’ll put fans in the seats. Adam, you’re up…

Adam Fonseca: Way to go out on a limb with that Tiger pick, Jon. Was Jack Nicklaus unavailable?  I’m taking Billy Horschel. Tons of attitude, tons of swagger, and he exudes consistency for a young player. Plus he has an awesome taste in aquatic athletic wear.

Jason Devaney: Going with Vijay Singh because you always need a big presence underneath the hoop. He’ll fight for rebounds and box out when needed.

JD: Taking Mike Weir. He’s a little guy but will run circles around everyone else on the floor. Reminds me of his fellow Canuck, Steve Nash.

JA: You don’t build championship teams with unproven guys like Horschel… or Canadians.

JA: With my second pick I’m taking… Rory McIlroy. Need someone to get along with my superstar, Tiger. That’s invaluable. Rory will run the point.

JA: With my third pick I’m taking… Justin Rose. We all know from watching the Miami Heat, you need a Big 3 to win. So I’ll roll to my title with the three best golfers in the world.

AF: My third pick is going to the best athlete in golf, Dustin Johnson. He’s got LeBron James strength with Derrick Rose determination. Plus, we need to see more of Paulina Gretzky at practice.

JD: I’ll take Steve Stricker for his height (6-0) and long arms. He’d be a solid power forward on my squad and he’s bound to have a good jumper with his lanky build. JD: For my fourth pick I thought about taking Miguel Angel Jiminez because the guy is in great shape and is very flexible (read my blog about his daily stretching routine), but since the Europeans have a tendency to flop I’ll go with Bubba Watson. I like his competitive and feisty attitude. Although he’s not allowed to rip my coach.

AF: Screw it. My next pick is Tianlang Guan. I’m playing him all 48 minutes because he’s in 8th grade and can handle it. He’ll also help me sell team merchandise overseas.

JA: Dang. I had Bubba and Tianlang high on my board. Well done, gents. Stricker though? This isn’t the old man league at the YMCA. Anyway, for my fourth pick I’ll go with Keegan Bradley as my long-range threat — my “Ray Allen” if you will, since I’m obviously forming the Miami Heat of golf. JA: And I’ll lock up my amateur with my fifth pick: Michael Kim, the low amateur from the U.S. Open. He’s been exposed to pressure at a young age, won’t let Tianlang take over the entire Asian market, and will serve as a good backup point guard to McIlroy (unless he can pull of “Kimsanity”!)

AF: With my fifth pick, I’m going with Rickie Fowler. He’ll be strong at either the point or 2-guard and prefers to wear creatively-colored apparel, much like Billy Horschel, thus completing my “Most Annoying Backcourt Ever Assembled” approach. We might not win many games this season, but we’re gonna look good doing it!

JD: I’ll take Anthony Kim because … where exactly is Anthony Kim, anyway? Hopefully he’s been shooting hoops because he’s on my team. JD: I’ll take Michael Weaver. Did you know he used to race go-karts at the national level? I didn’t know there was such a thing. That’s pretty sweet, so he’s on my team.

JA: You know we’re drafting a basketball team, not a NASCAR team, right?

AF: My next pick is Stewart Cink. I know, I know; he’s 40 years young and balding. But at over 6-feet tall, Cink will fit well into my front court. Plus, he’s proven he can win on the big stage (2009 British Open).

JA: Ernie Els. I need a big body down low. And all my other picks have won majors (minus the amateur of course), so I might as well take another one. JA: This one’s for you Fonseca — Jack Nicklaus as my Legend/Coach. I left him out there for you guys, but it turns out he is still available. Who better to lead all my stars than the best of them all?

AF: My Legend/Coach pick is none other than Mr. Lee Elder. This guy dealt with controversy and social opposition long before Tiger did, and he did a damn good job in the process. He’ll be an inspiration to my team. Plus, as an added bonus, I know a place that has a sweet conference room to hold team meetings.

JD: My Legend/Coach has to be Gary Player. He was the most fit guy on the Tour in his day, and he’s a great motivator. The players will have to overlook his nude photo shoot for ESPN The Magazine, however, in order to take him seriously. Jon Ackerman: Since the first pick fell into my lap, I had to take Tiger Woods. You gotta start a team around the best player of his generation. From there, it became all about building around him. I didn’t think Rory McIlroy would be available, but since he was there in the second round, it was a no-brainer because he’s one of the few guys Tiger likes. And with Tiger getting up there in age, it’s win-now mode for my squad. So all I needed were more proven stars, and the right legend to lead them.

I took Justin Rose to complete my “Big 3” and at 6-foot-3, he’ll be my power forward. Keegan Bradley will play shooting guard, and Ernie Els will bang down low. With all the major titles amongst my squad, Michael Kim will learn from the best, especially with the Golden Bear at the helm. I couldn’t be happier with the team.

Adam Fonseca: With having the second pick, I knew Jon would go with T-Dub. That being said, I decided to combine youth with experience. My first pick might seem odd with McIlroy still available, but there are very few players hotter right now than Billy Horshel, who seems like a future franchise player.

My choice to go with Mickelson and Cink in the front court is solely based on their experience in big games. Yeah, Lefty is going to get into foul trouble every game and the glare off Cink’s head will blind everyone, but you have to take the good with the bad. Guan and Fowler will be interchangeable at the point while my offense will go through Dustin Johnson at small forward. With Lee Elder as my legend to hold down the fort, I’m confident about our chances this season.

Jason Devaney:  I had to go with Vijay in the first round to establish a big presence in the paint. I built the rest of the team around him. Weir is my point guard, while Stricker and Bubba will play forward. I love Stricker’s lanky build – he reminds me of Larry Bird. I just hope he can shoot like him.

Anthony Kim … I still don’t know where he’s been (did I read something about an injury?) but he looks like a basketball player. I’ll bet if golf wasn’t his thing, basketball would be it. Ackerman screwed me out of my amateur pick so I went with Michael Weaver, who finished 8-over and missed the cut at the U.S. Open. Gary Player will lead by example.