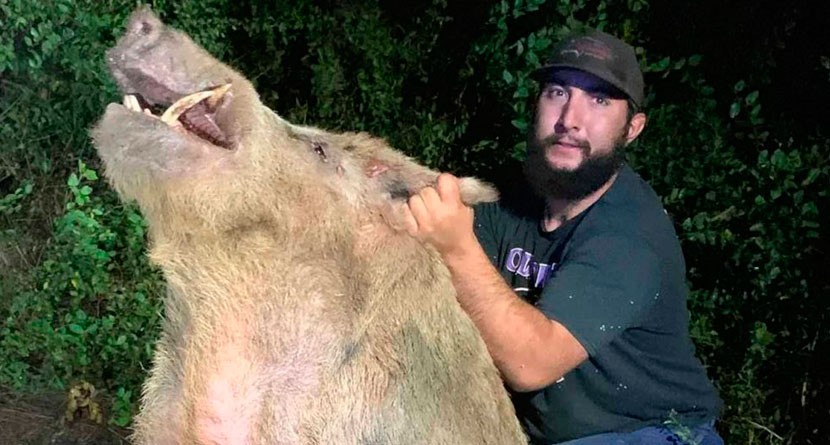 The animals you may encounter on a golf course are harmless more often than not.

Everyone knows to steer clear of alligator-infested waters and there are enough goose attack videos floating around the internet to keep folks at a safe distance from over-protective geese, but when there’s 411-pound feral hog inhabiting your golf course, you’ve got a problem.

That’s the predicament that Gateway Hills Golf Course in San Antonio, Texas has faced for the last few weeks. Reaching their wits’ end, the course enlisted the services of Wyatt Walton and Lone Star Trapping last week to remove the oversized boar from the premises.

Aside from the potential of causing harm or injury to golfers, wild hogs can cause considerable damage to the course by digging up and destroying turf in search of food.

Walton, two co-workers and three dogs tracked the wild boar and were able to apprehend it last week, but not after exhausting a few options. Walton told Insider.com that he and his colleagues attempted to capture the hog using cameras and electronic traps, but the animal was “trap educated,” which is when the dogs were put into action.

A Black Mouth Cur, a hunting dog known for its tracking skills, located the boar and two American Bulldogs caught the hog and held it by its ears until Walton and his team wrestled and tied up the animal.

“I’m just a guy in the middle of the woods catching pigs,” Walton told Insider.com. “As San Antonio continues to flourish in population, there’s that much more native land having developments built on it, to accommodate the growth native wildlife are just being pushed and pushed then eventually you end up having instances with human interactions, as they are just trying to survive is inevitable.”

Walton said that Lone Star Trapping has captured around 1,200 hogs in the area over the last few years, but the 411-pounder trapped at Gateway Hills was the largest he’s seen. According to Texas A&M’s AgriLife Extension, feral hogs typically weigh around 200 pounds with large hogs reaching 300 pounds.

Walton needed his two other colleagues to help him load the hog into a trailer before taking it to a processing center where it was killed.