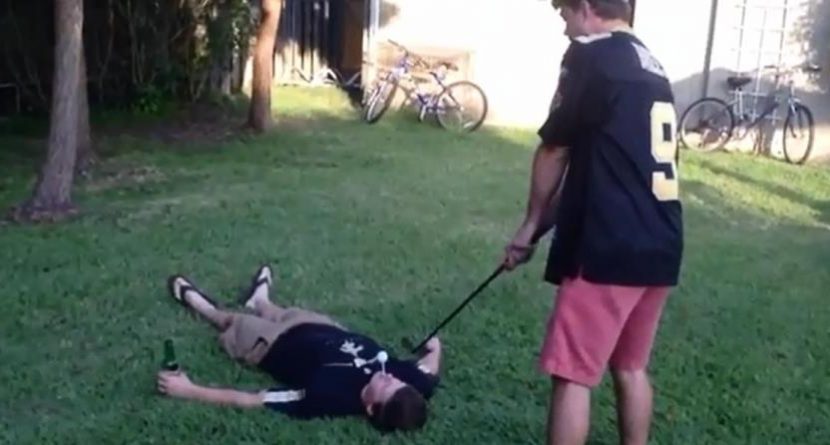 Because we feel it is our duty to warn you about the perils of golf, we are constantly on the hunt for “golf fail” videos. And we just uncovered another one.

What began as a great idea – one that so many people have, yet so few actually have the senselessness fortitude to execute – ended up showcasing one of the worst possible outcomes. Not the worst, but one of the worst. The plan: Drive a golf ball off a tee being held in the teeth of a friend.

Judging by the beer bottle in the hand of the fellow brave enough to hold the tee in his mouth, we assume some level of inebriation was involved here. For this next video, the guy flat-out tells us he’s hammered.

As great as those previous two videos are, they capture just one fleeting yet epic moment. The geniuses who go by the YouTube handle of “UltimateFailsComp” combine dozens of such instances into one fantastic package.

Yet, all those clips involve only humans, which we know are not the only species roaming golf courses.

And finally, this video isn’t really a “fail” because the kid hits his intended target. But incredibly, his mark was a deer.

Other Hot Links:
– Does It Drive: Can The Apple iPhone Dominate?
– Dick Fowler P.I. Bitten By the Love Trap
– Which Golfer Could Use $10 Million the Most?