5 of the Greatest High-Wire Acts in History 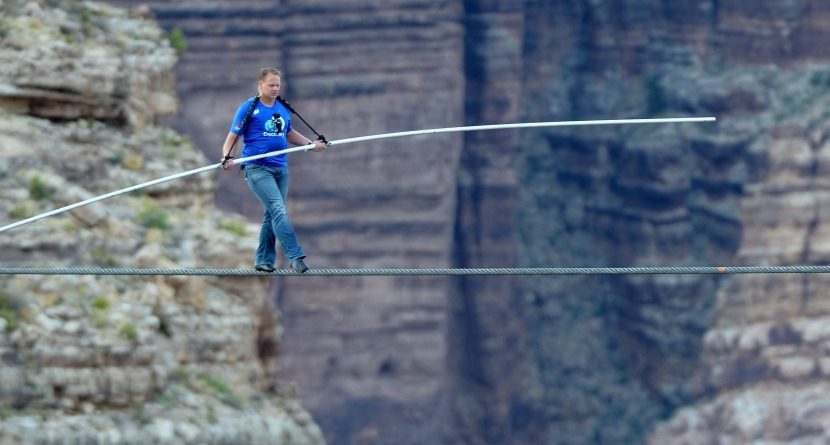 In case you missed Skywire on Sunday night – when Nik Wallenda traversed 1,300 feet on a 2-inch-thick steel cable hanging 1,500 feet above the river inside the Grand Canyon – golfer Hunter Mahan provided a fantastic play-by-play on Twitter:

#skywire this guy is crazy!

Still walking. Why is a helicopter flying around?

I think @NikWallenda #skywire walk yesterday across Grand Canyon was the bravest/craziest/physical/mental achievement by a man of all time.

Needless to say, Wallenda’s high-wire stunt stirred up memories of other daredevil acts over the years. Here are a few of our favorites:

* When you think of “daredevil” Evel Knievel immediate comes to mind. He once sought to clear the Grand Canyon in a rocket, but the U.S. government denied him airspace there. So in 1974 he took his rocket to Snake River Canyon and took off, but his parachute deployed early and he floated in his rocket to the bottom of the canyon. Knievel survived that and many other crash landings.

* More recently, Felix Baumgartner broke the speed of sound when he jumped out of a balloon hovering 24 miles above New Mexico. The stunt easily broke the record for highest free fall, and reports indicate that he reached a maximum velocity of 833.9 mph. He’s the only human to complete a supersonic skydive.

* Then there’s Alain Robert, aka The French Spiderman, who gained fame by climbing large buildings without equipment – and often illegally. Famous structures conquered: the Eiffel Tower (1,027 feet), the Empire State Building (1,250), and the Khalifa tower in Dubai, which is the tallest skyscraper in the world at 2,722 feet. Next on his list: the Cayan Tower in Dubai, which stands 1,004 feet but is the world’s tallest building with a twist of 90 degrees.

* The original daredevil may have been Harry Houdini, the escape artist who starred in the early 1900s. One of his most famous stunts was being buried alive. He said he nearly died his first time, but eventually emerged from under six feet of dirt. He later sealed himself in a casket, which was dropped into a New York hotel pool, where he stayed for more than 90 minutes.

* And in golf we have our own high-wire act: Phil Mickelson. You saw him at the U.S. Open — he chipped in for eagle on No. 10, then flew the green and lost his lead with a bogey on the par-3 13th. At the 2006 U.S. Open, he held the lead on 18  before sending his tee shot into a hospitality tent. But en route to winning the 2010 Masters, he navigated his ball off some pine needles, in between two trees and onto the green within five feet of the pin.