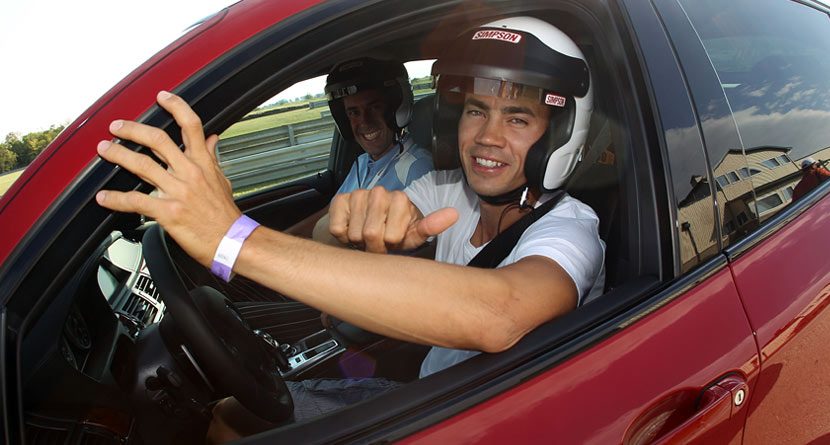 Previous Page: What It Takes To Win – Byron Nelson Championship

[Editor’s note: We asked Neil, who is slightly crackers, to give us some ideas about how golf might change if slightly crackers people, like Neil, were allowed to change the way events are managed. The result is, um, well, you’ll see. You expected me to say slightly crackers, didn’t you? Oh, and if you also happen to be slightly on the bonkers side, tweet us your suggestions to @back9network with the tag #WackyGolf. Your tweet might end up here.]

Create Flashier Trophies
Let’s face it, most tour trophies are lackluster. Even the tour’s flagship event, THE PLAYERS Championship, gives out a nondescript glass trapezoid. So for THE PLAYERS, I’d create a heavyweight champion-style belt and make the winner flex his muscles while showing it off to the crowd. Meanwhile, the Bay Hill Invitational will present the winner with a life-size Arnold Palmer statue. “Want to win my tournament, tough guy?” Arnold will say. “Then here’s a scale model of me to keep in your house for the rest of your life.” When players get fined, no one ever knows about it. As commissioner, not only would I release this information, I’d also make the punishments extremely public and memorable. A slow player would have to play his next round while wearing a giant Flavor Flav clock around his neck. A player who spoke out against the tour would have to sit in a dunk tank while I hit wedge shots at him and try to dunk him. It’s a gentleman’s game, but being a gentleman means taking responsibility for the bad thing you did.

Allow Pinch Golfers
Football has punters and placekickers. Baseball has pinch hitters and designated hitters. So golf should follow suit and allow “pinch golfers.” One shot per round, you get to call in a utility player to hit for you. Steve Stricker could become a highly sought-after designated putter; Henrik Stenson could specialize in shots that require you to strip down to your underpants. Guys could enjoy whole second careers as pinch golfers.

Install Clubhouse Cameras
We always see NFL coaches’ pregame speeches in the locker room, but we never get to see the trash talking that goes on in PGA Tour clubhouses. Can you imagine what Tiger and Phil must say to each other when no one’s around? Or the kinds of tantrums Sergio throws after a meltdown? This could be its own TV show, and it’d probably be better than the regular broadcast.

Hold Courtesy Car Races
Ken Duke may lead the tour in driving accuracy, but how is he at driving a Buick? Since these pampered pros get free courtesy cars every week anyway, let’s pit them against each other and hold races. The car companies would love the exposure and we might even get some ideas for “Fast & Furious 7: Country Club Drift.”

Add Sound Effects
When a baseball player hits a foul ball, stadiums love to play that “boing!” sound effect. Why can’t they bring the same soundboard to one hole on each PGA Tour course? When someone chokes down the stretch, you’d hear the voice of Porky Pig: “That’s all, folks!” One of the best things about pro golf is that – at least in theory – they play the same game as us. So they should eat the same food as us, too. I’d set up a muni-style snack bar at the turn and force players to eat there. Wouldn’t you be fascinated to see who gets three hot dogs and who opts for the frozen Snickers bar? Or even better, to watch some struggling guy order a Miller Lite or two?

Next Page: The $120 Breakfast: A Meal For Golfers Everywhere