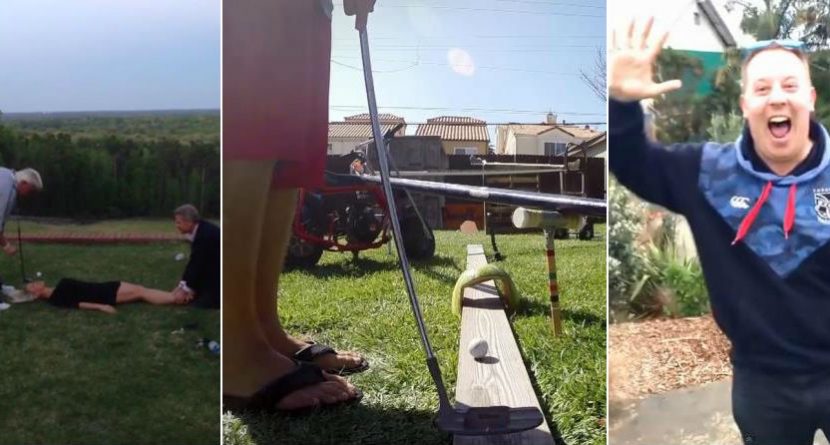 Maybe it was the explosion in use of GoPro cameras. Or just the sheer fact that more and more people walk around with a camera (phone) in their pocket every day. Whatever it is, it seems as if there was a deluge of amateur golf videos in 2014, many of them quite good.

The trick shot phenomenon reached a new level this year, so that helped in supplying YouTube with content. But many such videos are being professionally produced these days. Not that there’s anything wrong with that, but few things can top the pure elation of seeing a couple guys or gals turn on their cameras and record something amazing.

We do our best to track such videos. So by our estimation, here are the 9 best amateur golf videos from 2014 – and the list doesn’t include fails, because those are so amusing they deserved their own recognition.

John Daly Tees Off From A Woman’s Mouth

Related Links:
– 9 Best (Worst?) Golf Fails Of 2014
– This Is The Longest, Greatest 3-Foot Birdie Putt Ever
– Is This The Greatest Hole-In-One Of All Time?
– A Trick Shot So Incredible You’ll be Hungry for a Hot Dog
– Brandt Snedeker Shoots Skeet With His 4-Iron
– Three-Man Juggling Trick Shot Is The Best
– Bubba Watson Sinks Awesome Mini-Golf Putt… Backwards
– Juggling Pro Shop Trick Shot is Amazing
– Typical John Daly, Teeing Off From a Woman’s Mouth
– It Takes Two: Friends Team Up For Amazing Trick Shot