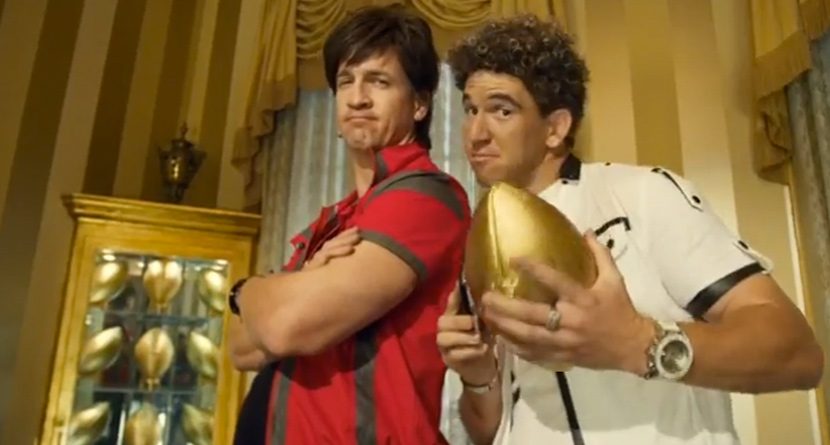 There is no question that when it comes to music videos, professional athletes love to show off their… um… skills in front of a camera every so often. For example, golf fans will forever remember the Golf Boys rap videos starring PGA Tour pros Bubba Watson, Hunter Mahan, Rickie Fowler and Ben Crane.

The NFL’s Manning brothers – Peyton and Eli – recently released their own music video called “Football on Your Phone” to promote DirecTV’s ability to stream live football with Sunday NFL Ticket. While these guys leave a lot to be desired in terms of carrying a tune, I have to admit the video is pretty hilarious:

In honor of the MTV VMA Awards, here is a list of 9 other music videos where athletes have made a cameo.

A day after marrying his college sweetheart Rebecca Liddicoat, the Washington Redskins star quarterback posted this gem on his Facebook page. Luckily I am not a small child (allegedly) otherwise RG3’s mask in this video would scare the hell out of me.

Shaquille O’Neal – (I Know I Got) Skillz

Shaq Diesel has had multiple music videos stemming from his limited career as a rapper, but this video might be his corniest. Nothing screams “The Nineties” like a 7-footer jumping around in baggy clothing.

Manny Pacquiao – Sometimes When We Touch

You may have seen a clip of this video showing Pac-Man singing his heart out on television before, but you probably haven’t seen the clip in its entirety. You can thank me later.

Deion Sanders – Must Be the Money

Primetime may have been flashy on the gridiron and on the street, but I honestly have no idea what Sanders is doing in this horrible music video.

A.C. Green, David Robinson, Barry Sanders – It Ain’t Worth It

You know what I think of when I think “Professional Athletes”? That’s right folks: abstinence. In this video, three of the biggest names of their generation rap about keeping it in your pants.

Ah yes, the greatest football team on the planet – at least in Chicago during the 1985 NFL season – filmed what might be the greatest sports anthem of all time. In other news, Jim McMahon still looks like that, but with less hair.

“Remember the Time” when LA Lakers legend Magic Johnson ruined Michael Jackson’s music video? I do, and here is proof.

OH EM GEE. There isn’t a music video in the history of the universe that has featured more sports personalities than M.C. Hammer’s iconic ballad “2 Legit 2 Quit”. Can you count how many of these players were involved in some sort of legal action in their lives, boys and girls? (Hint: When you reach five, just stop counting).

Other Hot Links:
– Canadian Golf Courses to Help Tim Tebow Plan His Future
– Loudmouth Brings Golf and Football Together
– 5 Golfers We Want to See on ‘Dancing With the Stars’