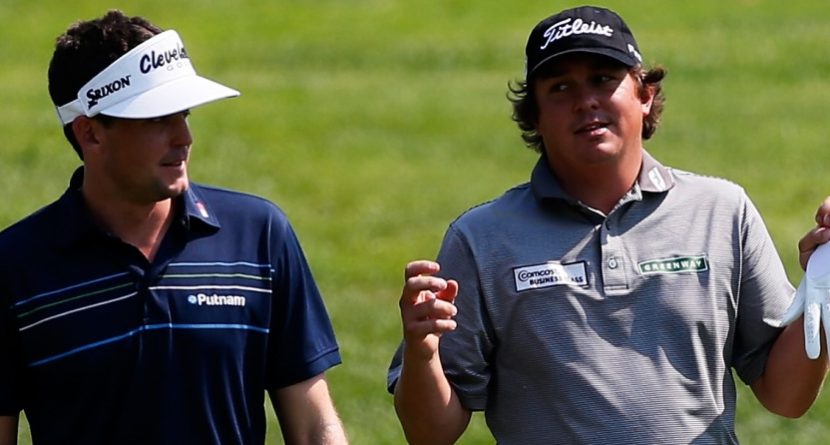 Sports Illustrated released its third annual Twitter 100 list this week, where it compiles the 100 “Twitter accounts essential to your daily routine for finding news, information and entertainment from the sports world.” It’s mostly made of up athletes, but media personalities, actors and players’ wives made the list too.

Sadly, we weren’t among the top 100. Or probably the top 10,000. Maybe next year. But three golfers made the list – Jason Dufner, Bubba Watson and Christina Kim – as did one high-profile girlfriend of a golfer – Caroline Wozniacki, the sweetheart of Rory McIlroy.

We know the SI staffers who compiled the list had to cut it off somewhere, and if they could have, they would have included more duffers. Here are the six golfers they would have (probably) included, after the three who did make the cut:

The man who sparked #Dufnering saw his list of followers grow rapidly after winning the PGA Championship, and those 294k people get to see a pretty outgoing personality. Dufner’s demeanor on the course is anything but affable, but he’ll tell you what he thinks about Auburn football and often retweet his dog, @PrinceDufner, an account he may or may not be running as well.

Do you know how hard it is to type on these buttonless phones? #smalldogproblems

The witty Kim keeps you up-to-date on her whereabouts, often interacts with other LPGA and PGA pros, and chimes in with thoughts on current events.

Back to practice with my @Cradlz. Yes, that’s the 5s that I got on Friday. The slomo camera is sick!!! pic.twitter.com/2mqdzqdjQu

I’m still shaking and I still don’t like guns. But I can fire em off alright for a first timer! pic.twitter.com/hV26Xe7pG8

Bubba recently joined the ranks of those with 1 million-plus followers, so he held a fan contest to fly his biggest fan and one of their friends out to meet him. When he’s not holding contests, he’s sending out pics of his son, commenting about “Duck Dynasty” or sharing thoughts on the NBA.

If ur my biggest fan, I wanna meet u! Click here to see where I’ll be flying you & a friend to meet me on tour! http://t.co/iJZZmnvMom

4) @bencranegolf: Jesus Follower, Husband/Father, Pro Golfer… In that order. ”I’m speaking to you as we speak, from the now, in the middle of the now.”

One of Watson’s band mates from “Golf Boys,” Crane is the leading goofball of the bunch. He’s always cracking jokes, but also holding fan contests in which they sometimes get to caddie for him.

Going 2 a wedng 2night.Is it bad when your wife says..”Don’t do that thing where u r doing your dance thing& everybody circles around u,OK?”

Bradley may be the one solely responsible for #Dufnering spreading like it did. His good buddy is often a target of his tweets, and Bradley also yaks it up with other golf pros or comments about his Boston sports teams.

If it is your mission to get a response from golf pro on Twitter, Poulter’s your man. He sends comments back to fans and critics alike, and not always nicely. That’s likely why he’s one of the handful of golfers with more than a million followers.

RT @WestwoodLee why are you not playing the dunhill? Disgrace! >> Because I have a life, 4 children wife, & I like to see them occasionally.

7) @themichellewie: hey! I am a professional golfer following her dreams. I love to laugh, love, eat, and live life to the fullest.

A rampant social media user, Wie shoots lots of pics to show you the life of an LPGA player. In addition to interacting with her girls, she’s also throwing shout-outs to her alma mater, Stanford.

8) @RickieFowlerPGA: Professional golfer who has a life on and off the course…follow me & check it all out

Fowler’s 574k followers get glimpses into an incredible life off the golf course, like making commercials as Dick Fowler P.I., trying out new Puma gear, attending Flutag, or doing a psychedelic golf challenge.

Heading down to Miami tomorrow for @redbull #Flugtag @redbullmiami…who else is coming? #givesyouwings pic.twitter.com/Am6sEODuig

9) @DaveLynndawg: Pro golfer on the European and US tour and general prankster will probably never grow up,wigan fan,watch fanatic

Another one who frequently interacts with fans, Lynn is most adept at one-liners – poking fun at himself, making fun of friends, or posting entertaining photos.