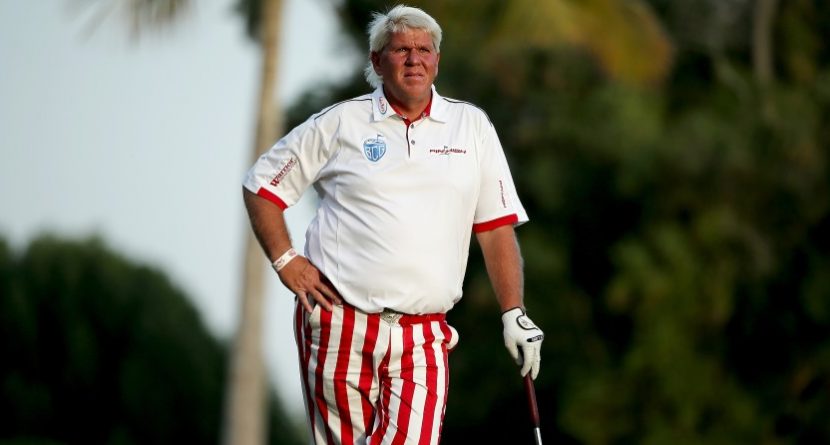 Monday marks the 48th birthday for one of our favorites, the always-bizarre yet always-entertaining John Daly. And his 48th year walking this planet was certainly, well, bizarre. Here’s a look back at the best of Daly’s past 12 crazy/hilarious/odd months:

Teeing off from people’s mouths
Daly first showed us this “trick” in September with a group of strangers in Nashville. Maybe because of that video, he was asked to perform the stunt again a few weeks ago in Augusta. What can we say? The man has a gift.

The wonderful collection of pants
Ever since Daly joined Loudmouth Golf in 2009, crazy pants have been the norm. But we still found it amusing when he walked a course in January sporting SpongeBob GolfPants. And yet again a few weeks later when he donned dollar bill pants, a pattern also popular with female pop stars. That one time he golfed in a tutu
Because sometimes Loudmouth shorts aren’t enough, Daly played a round for charity in a pink tutu.

The free new car that wasn’t
At the Humana Challenge Pro-Am in January, Daly thought he won a 2014 Hyundai Equus for sinking a hole-in-one. Turns out the ace came on a second practice shot and wasn’t eligible for the new car prize.

Snake encounter
While in South Africa for a tournament in November, Daly was greeted by a Mozambique Spitting Cobra. No one was harmed, the reptile was corralled, and Daly tweeted out one of the greatest pictures his feed featured all year:

Lions Den to Snakes Den not a way to get greeted this morn! #mybiggestphobia #snakes #MozambiqueSpittingCobra http://t.co/VVUk2utfe3

Just to be clear, he’s not gay
A BBC news station reported in December that John Daly was coming out of the closet. What the reporter meant to say was Tom Daley. To make sure people knew, Daly tweeted #IMNOTGAY:

Just to be clear, he’s still sexually active
Not only is Daly not gay, he’s not the sex-less 40-something that Miley Cyrus assumes about all people over the hill.

If you’re ever looking for Daly, start with the Downstream Casino
Round and round it goes, where John Daly’s bus will stop, no one knows. But you can be sure it’ll make a few visits to the Downstream Casino in Oklahoma, where apparently Daly is quite the singer and pianist: