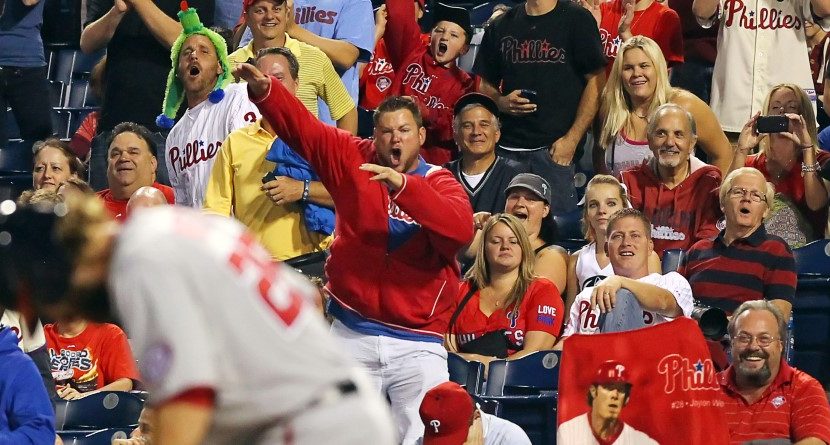 Sports fans in Philadelphia are a passionate bunch. We’ve witnessed it time and time again with each of the city’s pro teams. And we expect them to bring that same enthusiasm to the 2013 U.S. Open at Merion Golf Club in the town of Ardmore, which sits just a few minutes outside the Philly city limits.

The fans are sure to bring a unique feel to the tournament. And you never know, they might create some memorable moments. With Philly, it’s always possible. To illustrate, here are nine memorable sports moments already produced by Philadelphia sports fans:

1)  In 1968, with a lousy football team, Eagles fans booed and fired snowballs at Santa Claus. Frank Olivo was just a fan who dressed as Santa, but asked to parade down the field at halftime after the team’s original Santa got stuck in a snowstorm.

2)  More vociferous Eagles fans let their displeasure be heard in 1999, when dozens showed up in New York City for the NFL Draft. They were excited at the prospect of having the second overall pick, but immediately booed when the Eagles selected quarterback Donovan McNabb.

3)  During baseball season that year, Phillies fans hurled batteries onto the field when J.D. Drew showed up with the St. Louis Cardinals. The outfielder spurned Philadelphia after the 1997 draft because it wouldn’t give him the $10 million contract he desired as the No. 2 pick. He never signed and was drafted by St. Louis in ’98, then made his first Philly appearance a year later.

4)  In the fall of 1999, Eagles fans actually cheered a Dallas Cowboys player. But it was because receiver Michael Irvin lay motionless on the turf. He had suffered what turned out to be a career-ending neck injury.

6)  Flyers fans hinted at their political party of choice in 2008, when they booed Republican vice-presidential candidate Sarah Palin as she dropped the ceremonial first puck for the season-opener. This after the Flyers’ owner, Ed Snider, even introduced her as a “hockey mom.” 7)  Not all Philly sports moments are that bad. In 2008, after 25 years without a major sports championship, Phillies fans flooded downtown for the team’s World Series parade. More than an estimated one million people packed the route, causing such gridlock in the city that train lines had to temporarily shut down.

8)  In 2010, aiming to take after countless other crazies who’ve hopped over the wall to run around a baseball field, 17-year-old Steve Consalvi called his father to ask permission. Dad suggested he stay seated, but the kid ignored the advice and made headlines when he was tasered by a police officer.

9)  And we can’t leave without mentioning 76ers fans, who gave a standing ovation in 2012 to Andre Iguodala after a video tribute to the player who spent eight seasons in Philly. He was traded to Denver earlier in the summer while performing for Team USA at the Olympics. Yet once his first game in Philadelphia as an opponent began, Iguodala was booed every time he touched the ball.