9 Things We Love About Bill Murray 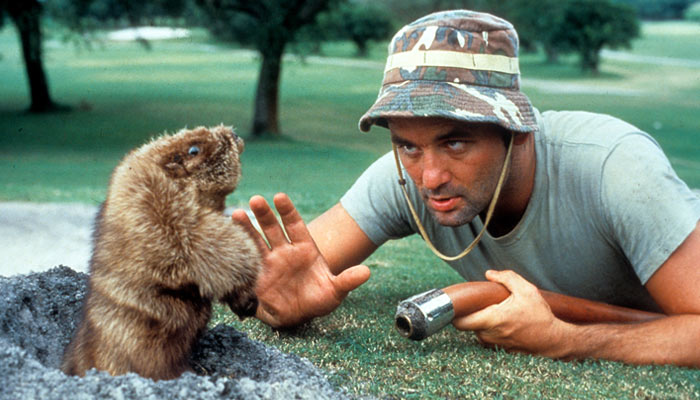 Bill Murray is as beloved a star as one might be. Murray has managed to be one of the biggest stars on Earth and still live his life to the fullest, seemingly doing whatever he wants, whenever he wants, for as long as he wants.

This weekend, Murray celebrates his 64th year of living life to the fullest. With all due respect to the Life Caddy or the Dos Equis guy, Bill Murray is probably the most interesting man in the world and you’ll be able to learn even more about the star, who’ll be the first guest on “Ahmad Rashad” when Back9Network launches on Monday, Sept. 29 on DIRECTV channel 262.

Until then, here are 9 things we love about the “Caddyshack” star:

1. Unpredictability –  If there is one thing that is predictable about Bill Murray it’s that he’s unpredictable. There are stories, nay, legends about him coming up behind random people, covering their eyes and then revealing himself to them. Or the one where he strolled up to someone in a Wendy’s, took a french fry off their tray and told them, “No one will ever believe you.” He’s crashed karaoke parties…

…and he’s been a guest bartender, reportedly giving everyone tequila shots no matter what they ordered.

Contrary to most “normal” Hollywood procedures, Murray doesn’t have a publicist or a manager. Instead, he just has an 800-number that people can call and pitch their movie to him. In an interview with “GQ Magazine,” Murray summed things up perfectly.

“‘I’ve actually thought about having a manager again. Just to clear my head and have a plan.’ He pauses, as if working it out in his mind.’Eh, it’s not that attractive to have a plan.'”

2. The Dramatic Actor – Murray may have rose to fame for his work and comedic genius on “Saturday Night Live,” but in recent years, he has flexed his muscles on the dramatic side of things. In 2004 he was nominated for an Academy Award for his role in “Lost in Translation” and was most recently nominated for a BAFTA for best actor for his portrayal of Franklin D. Roosevelt in the film “Hyde Park on Hudson.” It shouldn’t really come as a surprise that someone like Murray could be so versatile, but sometimes it’s hard to separate performances in films like this…

3. “Caddyshack” – It’s hard to think about Bill Murray and not think about “Caddyshack.” Or vice versa. His character, the grimy-but-lovable greenskeeper, Carl Spackler, is the stuff of legend. Golfers the world over worship at the alter of “Caddyshack” and while there are plenty of reasons to love the movie, Murray’s performance is pretty high on that list. I mean, who hasn’t recreated his “Cinderella story” scene on the course or while doing yard work?

So popular and influential was Murray’s portrayal of Spackler that Tiger Woods cites the film as his favorite of all-time and early in his career, spoofed the roll in an American Express commercial.

While many would assume his love for the game came from doing this movie, they’d be wrong. Long before Murray was famous for his “SNL” schtick and before he was a regular at Pebble Beach, Murray caddied to put himself through school. From then on, the game has always been a major part of his life and provided us the next reason to love the man…

4. His Love of Golf – As he has showcased repeatedly, one of the driving forces in Murray’s life is the game of golf. He’s shown off his swing in his films, like “Lost in Translation.”

Mostly, though, Murray’s passion for the game is on display at the AT&T Pebble Beach Pro-Am, in which he participates nearly every year. Murray is usually the biggest draw that doesn’t carry a PGA Tour card at the event. His appearances in the pro-am have given us a glimpse into how much joy he gets out of the game and some of the greatest golf attire photos ever. From his vast array of hats to his camouflage outfit, Murray always draws attention. In 2011, he teamed up with D.A. Points to win the amateur portion of the tournament. As usual with Murray, his post-round comments were filled with some gems.

While his love of the game makes him “one of us” in a sense, and is reason enough to love him, golf also plays a huge part in the next reason we all love Bill Murray.

5. The Murray Brothers Caddyshack Tournament – Every celebrity seems to have their own golf tournament but the one put on by Murray and his brothers has to be the most fun, right? The Murray Brothers Caddyshack Tournament is in its 14th year and has raised over $3 million for their foundation and for various charities. Following the tournament slogan of “Eat, drink and be Murray,” guests spend two days playing golf, eating, drinking, listening to live music and partying with the Murray brothers. While it’s too late to get in this year, you can always find out how to get involved in next year’s event by visiting the tournament’s website.

6. Fashion – Being Murray mean being able to wear whatever you want on the golf course, apparently. In his years of playing Pebble Beach and other celebrity pro-am tournaments, Murray has given us a gallery worth of unique apparel choices.

From the full-on camouflage get-up to the umbrella hat; the hula girl pants, PBR pants and various head wear in between, Murray is always the most colorful thing on the course. It takes a real man to wear pants with ladies on them, let alone in public and on a television in roughly 20 million homes. Here’s a look at some of Murray’s finest fashion choices:

7. Comedy – The first reason we all fell in love with Murray is his comedy. Murray was catapulted to stardom on “Saturday Night Live” in the 1970s and since then has been a national icon. His film resume includes “Ghostbusters,” “Groundhog Day,” “Caddyshack,” anything that Wes Anderson has done since 1995, “Kingpin,” “Stripes” and a host of others. It’s arguable for which of these he is most famous, but what is inarguable is that these films have stood the test of time and will always be classic.

8. He’s a Fan, Just Like Us – We’ve all got our rabid obsessions with our teams and our sports heroes, and Murray is no different. Growing up in Illinois, Murray is a die-hard fan of the Chicago Cubs, Bears and Bulls. Being that he’s Bill Murray, however, his fan experiences are legendary. He’s thrown out the first pitch at a Cubs game…

…and has been the guest singer of “Take Me Out to the Ballgame” during the seventh inning stretch at Wrigley Field.

Both of these would be dreams come true for your average Cubs fan but, as we’ve discussed, Bill Murray is far from an average anything.

9. He’s the Person We’d All Like to Be – He’s the life of every party, especially the ones he crashes. He’s a very good golfer who can forever claim to be a winner at Pebble Beach. He’s won awards for his comedy and for his dramatic acting. Really, the only question is: “Is there anything Bill Murray can’t do or hasn’t done?” I assume the answer to that is no, but if there is, I’m sure he’ll cross it off the list soon.