9 Things We Love About Michael Jordan 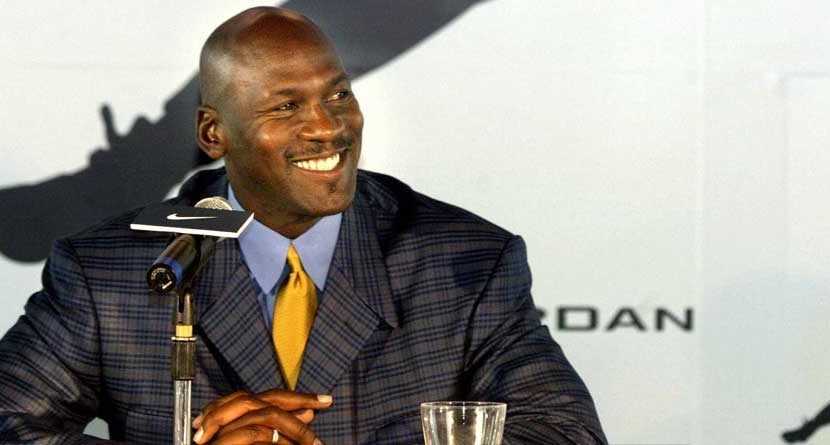 There are plenty reasons to love the greatest basketball player of all time, Michael Jordan. From his successful line of Nike sneakers to his amazing highlight-reel performances during his 19-year NBA career, Jordan, who is also an avid golfer, has even served as a source of inspiration for current top golfers such as Tiger Woods, Luke Donald and Keegan Bradley.

Since 2001, MJ has served as the host for the Michael Jordan Celebrity Invitational at the Shadow Creek Golf Course in Las Vegas. The event has attracted a bevy of sports legends and entertainment personalities including Julius Irving, Wayne Gretzky, Chevy Chase and Don Cheadle.

With the MJCI in Vegas set to tee off again this week, here are 9 things we love about the man affectionately known as “Air Jordan.”

1) The dunks – Obviously, this might be what Jordan is best known for. His legend began to grow when he bested the Atlanta Hawks’ Dominique Wilkins in the 1988 slam dunk contest, which was considered by many to be the greatest dunk contest in NBA history. In front of a capacity Chicago Stadium crowd, Jordan performed his now-signature slam, taking off running from one end of the court, lifting off from the free-throw line, double clutching in midair and slamming it down. It’s one of several memorable dunks from his career, but this one clearly is at the top of the list.

2) The cigars – These days, you hardly ever catch his “Airness” not puffing one of his many Cuban cigars. Jordan admits that he never got into the habit of smoking them until 1991, when Chicago Bulls owner Jerry Reinsdorf gave him one to celebrate the team winning its first NBA championship. The next time MJ received a cigar, he said, was from his good friend and Back9Network host Ahmad Rashad. “He used to get these Churchills from Las Vegas that were dipped in rum,” Jordan told the website, Cigar Aficionado. “I wouldn’t smoke them, but I would sit there and chew on them. I got to the point where it became very relaxing.”

3) Private car collection – Jordan also boasts an equally impressive private luxury car collection. As the video below shows, MJ’s collection includes Audis, a Bentley, a Ferrari or two, and even a Lamborghini. What better way to spend your time when not soaring through the air?

4) His Chicago-based steak house – One of the top steakhouse destinations in Chicago is Michael Jordan’s Steak House, located on North Michigan Avenue in the heart of downtown Chi-Town. Jordan makes frequent appearances around dinner time for the locals, and is always willing to offer a wine or cigar recommendation to compliment a tasty ribeye.

5) The impressive golf game – No matter how big or small a hole, Jordan has always found a unique way of making shots. He even puts a little skill into sinking many of his shots on the golf course. Check out this amazing 55-foot chip MJ drained at his celebrity tournament two years ago:

6) He’s Ryder Cup & Presidents Cup staple – Jordan is certainly no stranger to leading a winning team, which is why he can be often found supporting the U.S. team during Ryder Cup and Presidents Cup matches. He has served in many capacities, ranging from mentor to honorary captain, and often does his best to get into the heads of the opponent. Ian Poulter is no stranger to that fact, as he learned at the 2012 Ryder Cup near Chicago.

7) The “Monstar” slayer – In 1996, the Looney Tunes called on MJ’s services to help them win a basketball game against a group of animated villains known as “The Monstars” in the hit movie “Space Jam.” Jordan, along with support from the likes of Bugs Bunny, Daffy Duck and even Bill Murray, helped saved the day, and in the process, restored the stolen talents to his NBA pals Patrick Ewing, Larry Johnson, Charles Barkley, Muggsy Bogues and Shawn Bradley.

8) Business ventures – Through the Jordan Brand by Nike, MJ is without a doubt one of the more marketable figures in all of sports. Along with serving in his current role as the majority owner and chairman of the Charlotte Bobcats, Jordan has also served as a spokesperson for other major brands, such as Hanes, Ball Park Franks, Wheaties and Gatorade. Jordan has actually had a long relationship with Gatorade, having appeared in more than 20 commercials for the company since 1991, including the “Like Mike” commercials, in which a song was sung by children wishing to be just like him. It’s one that many of us still catch ourselves humming to this very day.

9) MJ “The Mentor” – Along with inspiring others to achieve greatness on basketball courts everywhere, Jordan has also brought several big-name golfers under his wing. Last year, Keegan Bradley spoke on how he’d been using Jordan, his neighbor in Florida, as a sort of “mental coach” to be more confident on the course. The two frequently play golf together and that companionship resulted in an official deal with the Jordan Brand.