9 Things Your Golfer Man Cave Needs, Including One That Costs More Than Your Car 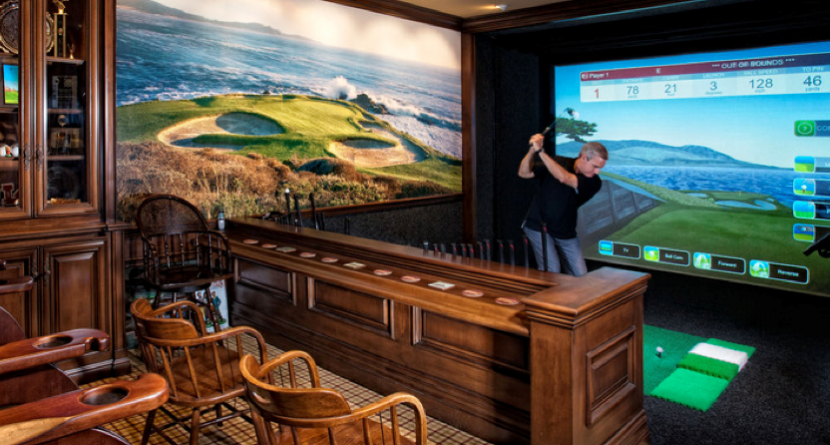 With seven incredible birdies in a row to close out his final round, Kevin Streelman stole the Travelers Championship on Sunday. That kind of run takes a lot of luck — but also practice, something Streelman enjoys doing. That’s partly because sometimes he doesn’t even have to leave his own home to get some work in:

Upon watching Streelman win and remembering his man cave, we decided to build our own “basement of dreams.” It might look something like this:

1) High Definition Golf simulator
Progress of your golf game can’t take a day off if the weather’s inclement, so forget about any dreary weather when you’re playing courses like Pebble Beach and St. Andrews. Got plenty of money to drop? You can even install an automatic teeing system. All in all, this simulator could cost you close to $65,000, but it does double as an HDTV that can show sports, movies and video games.

2) Target nets
As much fun as crushing drives into the simulator is, part of the purpose of this man cave is to keep your game sharp. So you need to work on your short game too. You can set up these nets all across your space and start draining chips. 3) Putting green
To really cut strokes from your game, though, let’s be honest and hone that putting stroke. Put in a top-of-the-line putting green from Tour Links. 4) Xbox One
Like we mentioned, that huge simulator screen can also be used for video games, and the new Xbox One is arguably the best gaming system available. For the time being, “Powerstar Golf” will have to suit your fix until “EA Sports PGA Tour” gets released in the spring of 2015.

5) Golden Tee
Sometimes, you just want to play golf old-school-arcade style. For that there’s Golden Tee. It’s not exactly “old school” because updated versions keep coming out, but why not bring your favorite game from the bar to your basement?

6) Tiger: The Authorized DVD Set
OK, this man cave can’t be all about games. How about some inspiration from the greatest golfer living today? Pop in these discs for an exclusive account of Tiger’s life. 8) John Daly Fathead
Did we say greatest golfers ever? Well, we meant greatest golf characters as well, and there’s none greater than John Daly. Not one but two Daly Fatheads are yours to choose, or you could go the more picturesque route and throw up a mural of TPC Sawgrass’ famous 17th hole island green. 9) Golf Pool Indoor Game
OK, we can’t completely neglect the kids. Off in the corner of your cave would be a great place to lay down this golf/billiards game. It’s shaped like a pool table, but the balls are golf balls, which you putt into the pockets. This way you can truthfully say the man cave isn’t entirely about you!