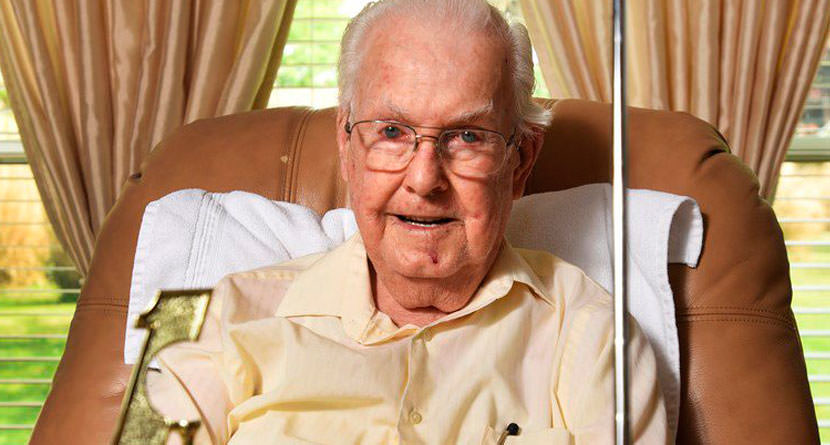 A 93-year-old golfer from Zanesville, Ohio has given new meaning to the phrase “walk off.”

Ben Bender had been playing golf for the last 65 years, but his on-going struggles with hip bursitis caused him to give up the game last month when the pain proved to be too much to bear playing the game that he loves. He did, however, manage to accomplish one of the rarest feats in the sport during his final round.

It took 65 years of trying, but this 93-year-old Ohio golfer finally shot a hole-in-one. https://t.co/NjBLJCXGen pic.twitter.com/QFWEjpFK0Y

Bender sent a 5-wood sailing towards the green on the par-3 third hole at Green Valley Golf Course and watched in awe as the ball landed and moved towards the cup as if it were being attracted by a magnet.

“I’d come close to some hole-in-ones, but this one was level on the green before it curved towards the hole and went in,” Bender said, according to The Zanesville Times Recorder. “I was in awe watching it. I played a few more holes, but my hips were hurting and I had to stop. It seemed the Lord knew this was my last round so he gave me a hole-in-one.”

Playing alongside Hearl Cubbison, Bender only played a few more holes after his ace. When the pain became too much to handle, he called it a career and made his way to the clubhouse to tell Green Valley manager Steve Galloway he was finished for good.

Bender’s long journey in golf included a stint of playing six times per week as a 3-handicap while living in Florida, but even with all of those rounds of solid play, a hole-in-one eluded him until his final round.

“I was lucky to play golf this long, but I never expected (a hole-in-one),” he said. “It was the last time I was able to play, and I think God had a hand in this. I loved the game and hate to give it up, but I can’t play forever.”