A Blue Collar Girl in a Popped Collar World:~Bring It Bikram 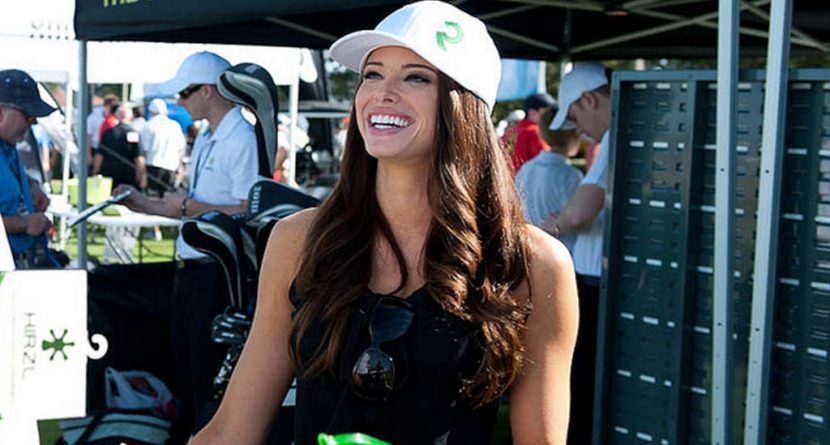 I’ve been trying to learn this game as best I can for a 28 year old hoping to catch up to the golfers who’ve been playing the game for decades. There’s only so many times you can sit in an Adirondack chair, swat away flies and watch everyone else hit balls on the range.

My golf instructor suggested I take up yoga to help with flexibility, and therefore, my swing. I always associated yoga with aging celebrities like Madonna– who want to show the world they still have “it.” I don’t know what “it” is per se, but I guess it involves a rubber mat and a pair of booty shorts.

I decided that if yoga was good, hot yoga would be better. So I signed myself up for a bikram class. For anyone who doesn’t know, bikram yoga is likely the most challenging in the yoga…milieu. The practice was invented by Bikram Choudhury (who’s still alive and at 66, still ripped), a yoga guru who teaches classes in rooms he calls “torture chambers.”

Because the rooms are heated to 105 degrees. The heat is supposed to make it easier for your muscles to stretch. Or something.

If you look it up online, you’ll see people in their BVDs–muscular, smiling, with strong, confident poses. You’ll see women with their spines bent backward, their heads between their heels. Men with their legs spread apart and their heads touching the floor. Some real cirque du soleil shit.

I got a different experience on my first day of class. There was more indecent exposure than a nudie bar in Vegas– it was a room full of Tweety Bird tattoos and C- section scars. A large- breasted man in the corner was ringing the sweat out of his muscle tee.

The room filled up fast– and I took a spot next to the only normal person I could find. Bikram yoga takes you through 26 different poses, twice. So if you screw up the first time, you get a mulligan.

After a few breathing exercises, it was on to pose number 2:

“Bend down,” the instructor said. “Now grab the back of your heels so your pinkies are touching. Put your head on your legs so no air or light gets through. So from the side you look like a Japanese ham sandwich.”

First of all, I’ve never seen a Japanese ham sandwich but if it’s anything like the American version, I still don’t get it. How am I going to make myself look like a tiny triangle of meat and cheese? And just where does the decorative toothpick come into play?

If you ever decide to join Bikram yoga, you’ll hear the instructor talk a lot about “locking your knees,” which is counter to what most coaches teach you in athletics– including golf. The idea is to take out the need to constantly balance yourself during poses, which in turn, maximizes your flexibility. It also makes it feel like your legs are about to crack in two equal parts. Much like a Japanese ham sandwich.

Before class, you’re supposed to drink as much water as you can, mostly because you sweat it all out in 90 minutes. I don’t know about you, but I’m not one of those 8- glasses-of-water-a-day kind of people. Okay. I get it. Water is good for you. But I’m not forcing it down my throat if I’m not thirsty. Can you imagine the pee breaks? Besides, I don’t want to be that person we’ve all seen jogging near the road, with 3 bottles of water strapped to their butt.

Back to golf. So what have 7 yoga sessions done for my swing? I’m hitting the ball 20 yards further. During my backswing, turning my upper body has become second nature.

I don’t have to think as hard. Or try as hard. I’m now completely addicted.

Watch out, Madonna. I’m coming for you.