A Day With the Pros in the True South 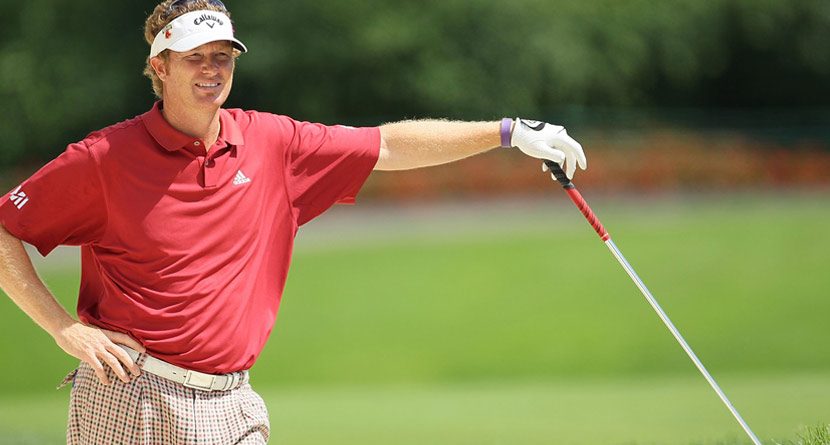 I’m sure recent early season PGA Tour events, the Humana Challenge and the AT&T Pebble Beach National Pro-Am that featured pro-am participants in the television coverage, made a lot of viewers wonder just how someone gets to play in these things.

I wondered myself until I had a chance to play in the True South Classic pro-am last summer at Annandale Country Club in Madison, Mississippi as a guest of the tournament sponsors.

The basic premise of Tour pro-ams is two-fold: it is an opportunity for amateur golfers (and you don’t have to be a single-digit handicapper to get in) to play with a tour pro during tournament week on the championship golf course and the other is money. Each amateur pays handsomely for the privilege and the money raised goes to the expense and profit for the tournament allowing them to cover their costs and pay out to their charities.

And the privilege of teeing it up with a pro does not come cheaply. The cost is a matter of a supply and demand, with the lesser tournaments getting in the range of $4,000 per golfer up to the big dog, Pebble Beach, fetching $25,000. That money adds up fast.

Usually it is just one round for one day at most events but Pebble ams get three days until the cut and can play the final day if they make the cut. At Humana, it is potentially three days with Sunday left for the big boys to play among themselves.

That’s pretty big ching for one day of golf but the other perks are V.I.P. worthy. They include the pro-am pairings party that usually has outstanding dining and an open bar for the evening. Never met an open bar I didn’t like.

Somehow I had assumed that the pro-am pairing would be prearranged but that was not the case at the True South. It turned out to be a clever lottery deal that took place at the pairings party. The number of amateurs determines the number of pros needed to match up with those groups. In our case that was about 40 pros.

The lottery consisted of the list of pros and their tee times posted on a large screen in the pairings party dining room and each amateur group having an ID number. Once the process started the overhead screen posted an amateur group number and an on deck group number. When your group number came up you had one minute to pick your pro.

The popularity of the pros seemed to be based more on their personality and likely willingness to engage and entertain the amateurs than on playing ability or past competitive record. In fact, two players had already been committed to tournament sponsors, Rocco Mediate and Tommy “Two Gloves” Gainey, to give you some idea of who the amateurs valued.

Our group huddled and agreed that our priorities were also to find an agreeable sort, someone we had something in common with and someone with a morning tee time since it is mighty hot in Mississippi in July.

We had our crib sheet with the pros’ names listed by priority. We got lucky since our number came up fairly soon in the order. We picked Tim Petrovic since he had an 8:30 tee time, was reputed to be a good guy and was born in Massachusetts as were I and another member of our group.

On pro-am day, which for us was Wednesday, we had a ticket in the car window that got us waved through a few stops and led us to be greeted with valet parking and a coupon good for $400 worth of TaylorMade and adidas products in their merchandise tent. Now that was a fun romp through the candy store of woods, irons, putters, shoes, shirts and golf balls.

Tim turned out to be an excellent choice. Although he and his wife now live in Austin, Texas, he remains a die-hard Boston sports fan to the point of discussing the relative merits of Red Sox utility player Pedro Ciriaco. So we had plenty to talk about.

Petrovic was talkative to everyone in our group and helped out with a few tips and a few putting reads. The only glitch came when politics came up and he identified himself as a conservative which immediately brought out the predictable personal demonization by my liberal New Yorker cart mate.

The PGA Tour takes the pro-am seriously and requires every pro to play in a certain number of pro-am events (yes, even Tiger Woods) during the season, although the total isn’t that many. The pros do get a flat fee of about $1,000 per round.

We had a great experience with our group but it was amazing to hear some of the horror stories from other amateurs. Some of the pros were described as ignoring their amateur group, walking ahead of them, telling them to pick up repeatedly and suggesting they just go back in.

That was very unfortunate since the True South Classic was a superbly run event just oozing with true Southern hospitality and a great place to visit and play in a pro-am.

Tim Petrovic made the cut at the True South and came away with a five figure payday. Our group likes to think we spurred him on, and I’m sure he would agree.