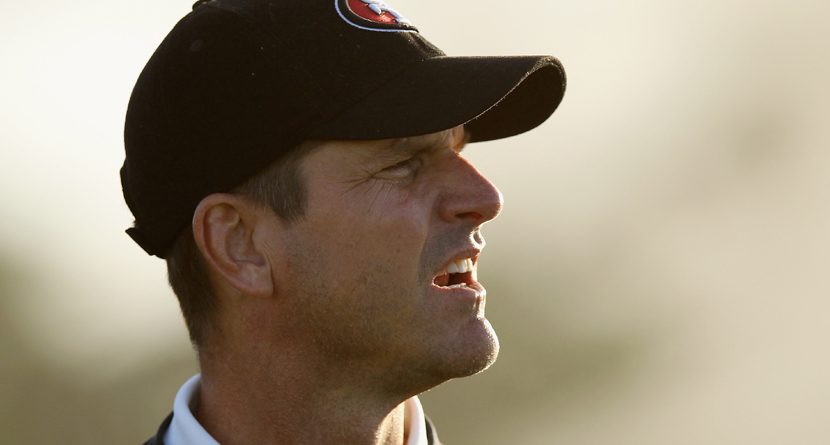 Well over 100 million Americans are set to tune in this Sunday to watch the Baltimore Ravens take on the San Francisco 49ers in Super Bowl XLVII in the Mercedes-Benz Superdome in New Orleans, La. While that number may sound overwhelming, don’t be surprised if there aren’t a few folks out there who don’t know the first thing about the big game. Here now is a quick guide for golf fans to help them better understand Super Bowl XLVII.

New Orleans is like Merion in the sense that this is the first Super Bowl to be held in the Big Easy since 2002, and this year also marks the return of the U.S. Open to the suburbs of Philadelphia for the first time since 1981. That’s quite a long absence for both tradition-rich venues, especially the Superdome, which required plenty of recovery time post-Hurricane Katrina. It’s been a little over seven years since the storm battered the Mississippi Delta and, while portions of Nola have returned to normalcy, there are still significant swaths of the city that remain uninhabitable.

Merion Golf Club is much more of an unknown entity than the Superdome with Aussie David Graham winning the last U.S. Open in ’81. Golf’s finest will be forced to deal with this unfamiliarity and we might be able to expect a winning score right around level par as the USGA continues to lick their wounds post Congressional 2011. Even still, the scores at Merion won’t come close to touching the final result Sunday in New Orleans as I predict the Ravens upset the 49ers 24-21.

Ray Lewis is like Chi Chi Rodriquez, if only because the soon-to-be-retired Ravens linebacker’s pre-game dance routine only comes close to matching the swashbuckling goodness of the Hall of Famer’s putting green celebrations.

Hurricanes at Pat O’Brien’s are like $3 drafts at Augusta because proprietors at both locations understand that a hydrated fan is a happy fan and, although Amen Corner is no Bourbon Street, that does not mean that folks at the Masters can’t appreciate their fair share of affordable adult beverages while traipsing through the pine straw. One of the dirtiest little secrets in golf is how cheap the concessions are at Augusta National. It may cost you your first-born child just to get a ticket to the Masters but that doesn’t mean that patrons shouldn’t be allowed to stack collectible cups of domestic beer like they’re emptying the top shelf of the dishwasher.

Drinks at the Superdome are likely to fetch for far more than $3 but that’s OK because Super Bowl crowds tend to be more of the wine-and-cheese variety who earned passage to the event through some sort of corporate raffle or handout. In fact, the more I think about it Augusta and the Super Bowl have much more in common than booze.

Colin Kaepernick is like Bubba Watson because both players are changing how the game is played — the 49ers quarterback with the pistol formation and the reigning Masters champion with an unorthodox, home-schooled swing. The two icons are also similar in the way that they wear their faith on their sleeves, or tattoos in the case of Kaepernick, while Watson prefers preaching psalms via Twitter.

Check with Darren RoveIl but if the 49ers go on to win the Super Bowl then Kaepernick instantly becomes one of the most marketable players in the NFL and more and more front offices, like the Philadelphia Eagles in hiring Chip Kelly, will continue to realize that the read-option is more than just a fad not to be confused with the wildcat fad which has unfortunately gone the way of Tim Tebow.

It’s been a very tough start to the 2013 season for Bubba Watson who has withdrawn from his first two tournaments due to illness. When healthy Bubba Golf offers fans a unique glimpse into the mind of a savant who wields a pink driver with the same sort of reckless abandon as when Ravens safety Bernard Pollard closes in on a defenseless receiver.

Radio Row is like the PGA Merchandise Show because everyone in attendance is present to either hawk their wares or transmit some sort of airborne virus.

The Harbaughs are like the Molinaris if brothers Eduardo and Francesco were to ever oppose one another in the Ryder Cup. In case you were lost at sea for the past week, Jim and John Harbaugh are set to become the first brothers to coach against one another in a Super Bowl, which is a surprise only if you haven’t seen or heard an interview with either coach. These two were born to be football coaches and I suggest you read Dan Wetzel’s column on how the brothers saved their dad’s job with the Western Kentucky football program back in the mid ‘90s. Still doesn’t explain why Jim asked Stanford to build him a $70,000 personal bathroom but some things are better off left unsaid.

James Carville is like Tim Rosaforte based solely on appearance and nothing to do with the New Orleans native Carville’s liberal leanings.

Joe Flacco is like Tiger Woods as reports of their respective demises are both premature and inaccurate. How many tourneys does Tiger need to win since a transcendent Thanksgiving night back in 2009 before critics back off and realize that, while he might not be Tiger Y2K, he’s still one of the best two players in the game who’s capable of winning on any given weekend? It’ll take a conquest at one of the majors for people to finally back off and realize Tiger is the still the man just like the NFL has come to realize that Joe Flacco is much more than a serviceable signal caller. Just look at his career playoff record. It wasn’t too long ago that the Charm City wanted to run the quarterback out of the Chesapeake Bay but, after outplaying Peyton Manning and Tom Brady in successive weeks, Baltimore Joe is in the market for a significant pay raise.

Roger Goodell is like Mike Davis as both chiefs are held with disdain in certain circles. A few establishments in New Orleans have been posting pictures of the NFL Commish alerting staff not to serve the man they hold responsible for sabotaging the Saints season after he suspended head coach Sean Payton for his role in the bounty scandal while Davis, the executive director of the USGA, was recently taken to task over the proposed anchored putter ban last weekend during a PGA Tour players-only meeting. No word yet if there is any truth to the rumor that Keegan Bradley, Webb Simpson and other belly putters have offered a significant sum to the person able to “convince” Davis to never implement Rule 14-1b but if any funny business is discovered expect Roger Goodell to suspend all involved parties for the remainder of the 2013 PGA season. Yes, the commissioner of the NFL is that powerful.

And finally, Jim Nantz is like Jim Nantz right on down to the customary “Hello, friends.”