A Look at Some of Golf’s Greatest Records 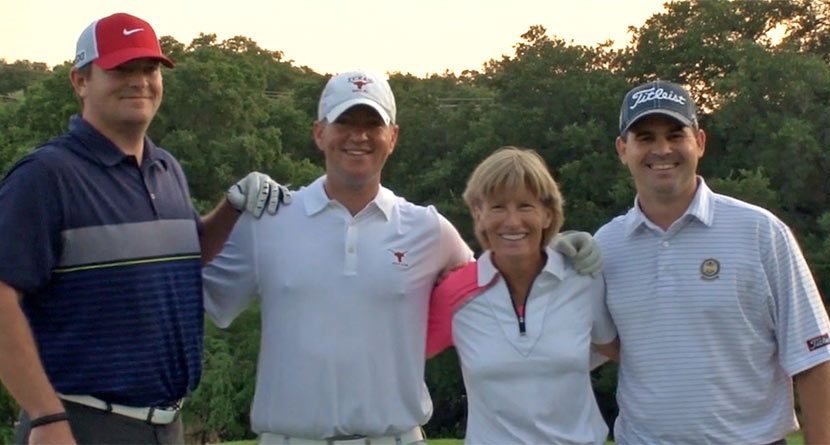 When Jennifer MacCurrach, Bryan Benner, Aaron Chilek and Mike Sizemore teed off at Lakeway Live Oak Golf Course on the morning of July 2, they did so with fundraising in mind, but little did they know they’d be making golf history.

The four Austin-area golfers had their eyes set on the Guinness World Record for “Most Golf Holes Played by a Fourball in 24 Hours in a Cart.” Indeed, it is almost as hard to say as it is to do. The previous record was set in 2008, when four golfers in Ontario, Canada played 234 holes in a 24-hour period.

At 12:30 AM on Tuesday morning, after 18 hours, 9 minutes and 37 seconds of drives, chips and putts, the foursome entered the history books, as they finished their 235th hole. The group continued to play the remaining front nine after breaking the record.

MacCurrach, the executive director of First Tee, is the one who brought the group together.

“This is absolutely the most fun I’ve ever had playing golf,” MacCurrach said afterward.

So where does the feat rank amongst some of the other notable records in golf?  Take a look and decide for yourself:

Most Golf Holes Played by an Individual in 24 Hours With a Cart
From June 21-22, 2004, Robb James played 851 holes at Victoria Golf Course in Edmonton, Alberta. The course was nine holes and stretched 3,002 yards.

Fastest Golf Drive
On March 3, 2012, American Maurice Allen hit a golf ball 211 mph at the Americas Golf Outlet in Orlando, Fla. The speed of the ball was determined using the Full Swing Golf Simulator, which uses two concentric laser nets to measure the spin and velocity of the ball.

World’s Longest Golf Course
Jade Dragon Snow Mountain Golf Club in Lijiang, China, is a par-72 course that plays 8,548 yards. The longest hole on the course is No. 5, a 711-yard par 5.

Highest Annual Golf Earnings
Tiger Woods set the bar for most earnings in a single year in 2010, when he collected $105 million from June 2009 to June 2010. The earnings included $30 million from Woods’ sponsorship deal with Nike. Largest Collection of Golf Clubs
Spaniard Robert Lantsoght owns 4,393 golf clubs. He displays each club from his collection, which he started in 1992, in his restaurant on the Costa del Sol, a region in the south of Spain. And he updates his collection on a weekly basis.

Youngest Golfer to Score Their Age
The youngest golfer to record a score equal to their age was Tsugio Uemoto, who scored a 68 on Oct. 22, 1996, at the Higashi Hiroshima Country Club in Japan. Uemoto was born on July 3, 1928.

Farthest Golf Ball Blow
The farthest distance someone has ever blown a golf ball was 20.85 feet. The blower, American Ashirvad Zaiantchick, achieved the feat at the Jamaica YMCA in New York City on Nov. 29, 2010.

So, what’s the verdict? What do you believe is the most impressive world record in golf?