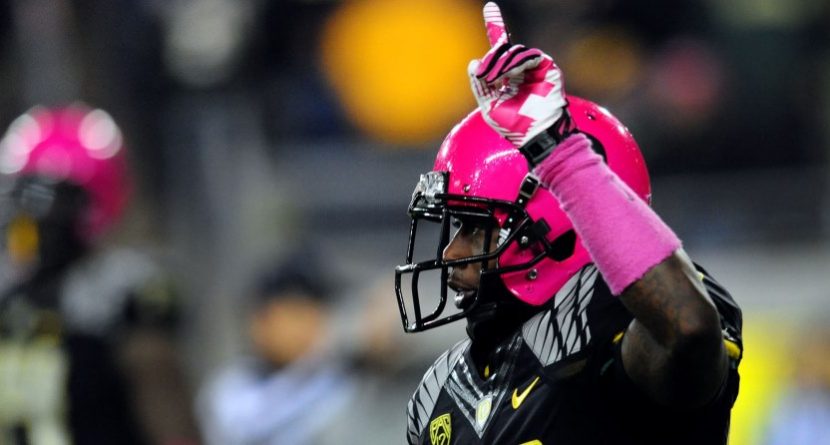 If you saw any college football over the weekend, you likely witnessed No. 2 Oregon throttle the Cougars of Washington State, 62-38. The Ducks are now 7-0 and have scored at least 45 points in every game this year.

And they did so Saturday sporting pink. October is Breast Cancer Awareness Month, so Oregon did its part by donning pink helmets, gloves, wristbands, socks and shoes.

Also on Saturday, the Ducks began the Oregon #Play4Kay Fundraising Auction, in which 25 pink helmets are being auctioned through Friday. They are a new, unworn helmets and every penny of the proceeds from the auction will support the Kay Yow Cancer Fund. Yow was the N.C. State women’s basketball head coach from 1975-2009, and she was diagnosed with breast cancer in 1987.

Fair market value of these helmets is $1,000, but the one signed by former Oregon stud Ahmad Rashad is going for more than $20,000. Currently a Back9Network executive producer and on-air host, Rashad played as Bobby Moore in college, and amassed 3,871 yards from scrimmage and scored 36 touchdowns in three years at Oregon. He went on to play 10 seasons in the NFL. Being able to contribute is not something Rashad takes lightly.

“My daughter (Keva) is a breast cancer survivor,” he says. “She just finished walking 60 miles for breast cancer awareness in Atlanta (where she lives).”

The fact that he can support a cause close to his heart for his alma mater is just a bonus.

“The U of Oregon has played such a large role in my life. Not only because I was an all-American football player but because I learned to become a concerned citizen of the world and knowing that we — society as a whole — could make a difference. (Nike founder) Phil knight has been such an inspiration to me since I was an 18-year-old kid. The Nike spirit of “Just do it” comes from a pioneering attitude that is unstoppable. I’m so very proud of those roots. ‘Once a duck, always a duck’ is a saying that we don’t take lightly.

“And to be able to contribute to breast cancer awareness again makes me feel like a very proud Duck.”

Oregon head coach Mark Helfrich also autographed a helmet, and his is going for more than $10,000. Former Oregon star Joey Harrington signed one, too; it’s up to just over $2,000.