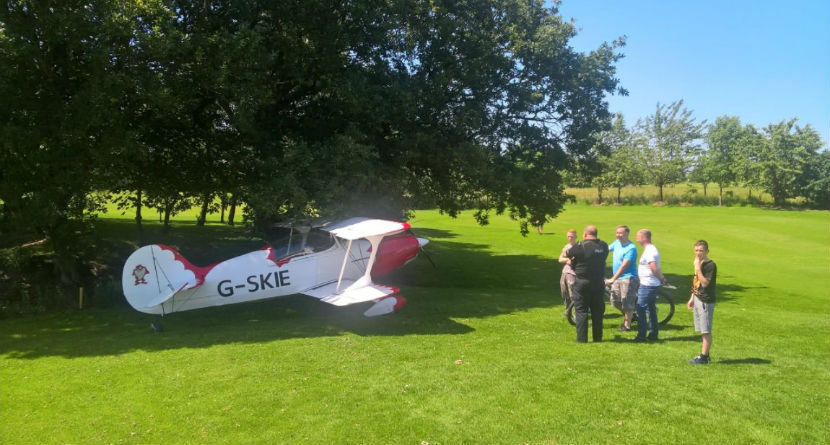 Here’s a hazard you don’t see every day on the golf course. Last weekend, an English course was used as an emergency landing strip for a small plane in distress. While that normally wouldn’t be an issue, this incident occurred in the middle of a beautiful Saturday afternoon while people were playing. Thankfully somebody had the presence of mind to film it and also thankfully, nobody got hurt.

The Bolton News buzzes the tower with the report:

Golfers had to run for cover when a plane unexpectedly landed on a golf course this afternoon. The light aircraft made an emergency landing on the 14th fairway at Westhoughton Golf Club. The plane was seen circling in the skies above by golfers before coming into land just before 2pm. No one was hurt in the incident and the lane is not believed to have been damaged in the landing.

Club secretary Neil Robinson was on the 18th green when the one-seater plane came down.

He said: “He obviously had major mechanical problems, we heard him circling and thought this is bad, it doesn’t sound healthy. The next thing it was coming down through the trees and golfers were scattering everywhere. It was quite a hair-raising moment! It is one of the stranger things to have happened here.”

Mr. Robinson added: “We are golfers, we’ll play in wind, rain and around abandoned aircraft. It’s not often you get excitement like this golf clubs. It certainly livened up the afternoon!”

Here’s the footage of the emergency landing:

It’s still not clear if the pilot yelled “fore” before touching down.