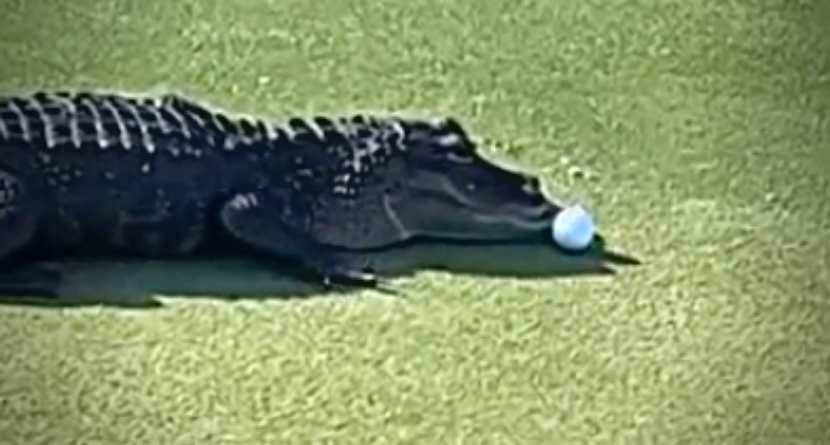 As any golf movie buff can tell you, Happy Gilmore got revenge on the alligator that prematurely ended the playing career of his swing coach, Chubbs Peterson, and later gifted his mentor with the one-eyed beast’s mounted head — an ill-conceived gesture that backfired spectacularly.

But that’s Hollywood hooey. At Plantation Bay Golf and Country Club in Ormond Beach, Fla., they’ve got the genuine article: a gator with an appetite for Titleists.

As you can see from the footage, aired by FOX 35 in Orlando, the gator is actually much, much smaller than the big-screen behemoth that bit off Chubbs’ hand and subsequently scared him to death. And the way the little guy cocks his head and casually munches on the ball is remarkably…dog-like.

Still, it is somewhat alarming to consider how close the videographer had to get in order to capture the shot. As the beast clears the green, you can hear one of his onlookers offer up a plan for getting the ball back.

“Chase him closer to the hole,” the genius golfer says. “Have him just drop it in the hole.”

So what’s the ruling when you’re the victim of reptilian golf ball larceny? More favorable than a lot of other man vs. nature scenarios, it turns out.

“If your ball is moved by an outside influence, such as an animal or a spectator, there is no penalty to anyone and the ball must be replaced,” reads a passage from the topic overview section of the USGA Rules of Golf website under the heading “Ball Moved or Deflected.”